The New York Film Critics Online may be the least significant of the groups to announce film awards on Sunday, but the organization is definitely the most fun.

That’s because the NYFCO allowed members to tweet from inside the group’s deliberations, announcing the awards as they happened and giving insight into the process.

For instance, veteran critic Rex Reed reportedly abstained from voting in the animated category, saying, “I hated them all.” “Up” won. 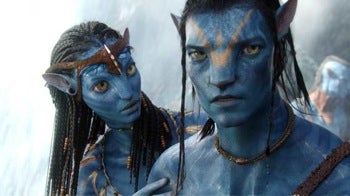 In the group’s voting on Sunday, James Cameron’s “Avatar” (left) was named best film, while Kathryn Bigelow took home the best director prize (in what was reportedly a tight race with Cameron, her ex-husband) for “The Hurt Locker.”

Jeff Bridges (“Crazy Heart”) and Meryl Streep (“Julie & Julia”) won for best actor and actress, while Christoph Waltz and Mo’Nique continued their run through the supporting awards with victories for “Inglourious Basterds” and “Precious,” respectively.

Streep’s nearest competitor in the best-actress race was Tilda Swinton for “Julia,” making the race “Julie & Julia” vs. “Julia.” But according to a tweet from Cinema Blend critic Katey Rich, half the voters hadn’t seen Swinton’s film.

ADDENDUM: According to NYFCO member Robert Levin (see his comment below), Rich was only speculating and nobody at the meeting knew who had or hadn’t seen "Julia."

The best documentary vote came down to “The Beaches of Agnes” and “The Cove.” The latter won.