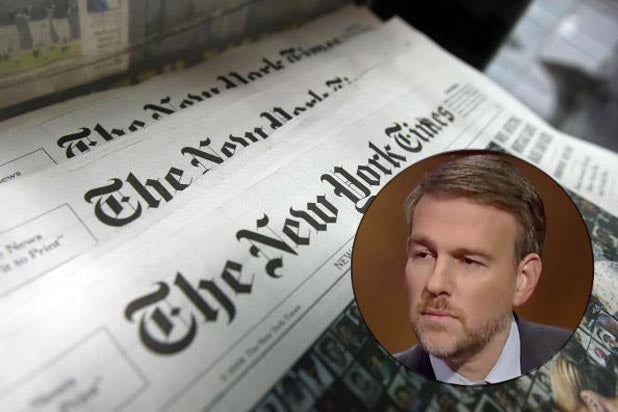 New York Times opinion writer Bret Stephens was hit with a flood of backlash over his Friday column opposing a national lockdown due to the coronavirus pandemic and, in the process, what many considered insulting the citizens of New York state.

“Does anyone edit Stephens? Does anyone even do a cursory fact check?” journalist Eoin Higgins wrote, pointing out that areas other than New York have seen surges in COVID-19 cases and deaths.

Stephens’ latest column, titled “America Shouldn’t Have to Play by New York Rules,” notes that if “New York City proper were a state, it would have suffered more fatalities than 41 other states combined.” A horrific fact that does not go unnoticed by anyone, especially those living in New York.

But he then goes on to write, “No wonder so much of America has dwindling sympathy with the idea of prolonging lockdown conditions much further. The curves are flattening; hospital systems haven’t come close to being overwhelmed; Americans have adapted to new etiquettes of social distancing.”

A Reuters poll on April 21 showed that “despite scattered protests, most Americans support shelter-in-place,” writing, “72% of adults in the United States said people should stay at home ‘until the doctors and public health officials say it is safe.’ That included 88% of Democrats, 55% of Republicans, and seven in 10 independents.”

As of Saturday, New York state has more than 271,000 confirmed cases of the coronavirus and over 16,000 deaths.

Rebuttals to Stephens’ piece immediately began to flow in on social media, calling him out on his facts and “irresponsible” reporting.

“Hey Bret Stephens (who you can’t even @ anymore) and @nytopinion, this assertion in your column today has no basis in fact. Polls show wide majority support for stay-at-home orders and opposition to reopening too aggressively. What you call ‘much of America’ is a fringe position,” one Twitter user wrote.

Also Read: Coronavirus Deaths Tops 50,000 in US, More Than Any Other Country

And there were others. Lots of them. Here are a few:

I'm not linking to that Bret Stephens NYT column, but "New York shouldn't force the rest of the country to lock down" is A) not what's happening B) irresponsible C) yahooism D) FAKE yahooism, given who he is E) underpinned by the false premise that "the country" wants to reopen.

How many times do I have to tell you people that the audience for these pieces is not the public but the paper's ownership, who want to go eat Trader Joe's microwave lasagna for $74 a plate at Cipriani and need one of the seevants to tell them that it can happen any day now. https://t.co/T8KXNsNmC4

Does anyone edit Stephens? Does anyone even do a cursory fact check? For fuck's sake guys. https://t.co/C7Ck8Fnjlo

I’m not a fan of Bret Stephens generally, but this op-ed is unusually appalling. It ignores the documented reality that rural locales can (and in some places already have) experience infection & fatality rates at NYC levels. It merely takes longer for it to spread elsewhere.

"This healthcare is made in New York City."

"Well, at least we're not like New York! We showed them!" https://t.co/rZgepBe8k6

I guess #BretStephens stocks are taking a hit. ‘Bedbug’ Stephens is at it again selling some whack spin that takes no responsibility for future infections and/or deaths. Glad he didn’t get sponsored by ‘Clorox’ or the whole mix would make him suspect to adolf Twitler pic.twitter.com/bb4P4xtTa2

Bumping this because all Bret Stephens can do now is advocate for people to die because he lacks any ability to give further insight into the pandemic. All he has are takes. He's a useless, awful human being.