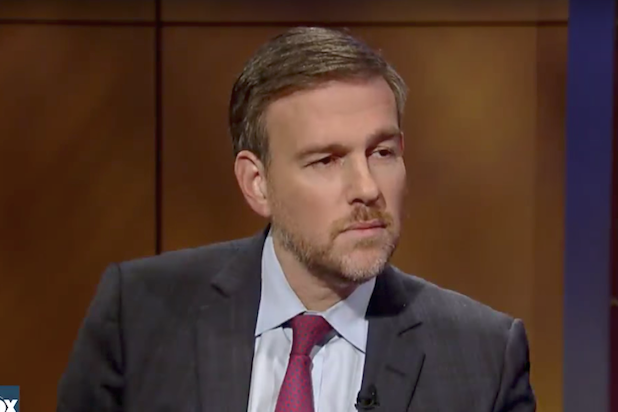 The piece was actually titled “Weinstein and Our Culture of Enablers,” but Stephens wanted to make sure you knew his true intention for writing by tweeting one of its most provocative phrases.

A defense, of sorts, for Harvey Weinstein: https://t.co/CCTYKZUVP9

The nut of his argument is that Weinstein’s actions cannot be viewed in isolation but rather as part of a larger culture of permissiveness from media and Hollywood elites.

“It’s in this context that one can mount a defense of sorts for Mr. Weinstein, who inhabited a moral universe that did nothing but cheer his golden touch and wink at (or look away from) his transgressions — right until the moment that it became politically inconvenient to do so,” Stephens wrote. “Hyenas cannot help their own nature. But the work of a morally sentient society is to prevent them from taking over the savanna.”

Later on in the piece, Stephens compared Weinstein to both Donald Trump and Bill Clinton, calling the trio “libidinous cads.”

The piece immediately sparked controversy online from critics, but in comments to The Wrap, Stephens brushed them off, insisting his overall piece had been extraordinarily tough on Weinstein.

“If someone wrote of you, as I wrote of Weinstein, that your repulsive face turns out to be “the mirror image of [your] putrescent soul,” would you take it as a “defense”? he asked. “The rest of the hysterical commentary is just further depressing evidence that only a fraction of the critics, including the supposedly literate ones, bothered to read the column.”

That Bret Stephens has a job in journalism is astounding. Ross Douthat has had 2 legitimately thoughtful pieces on this topic.This is trash! pic.twitter.com/ZMQDmA0zI0

An accused rapist is “just another libertine cad,” according to Bret Stephens. The man takes on Weinstein continue to amaze. pic.twitter.com/7NmwL8BIpn

I didn’t think it possible to write a worse take on Weinstein than that self-loathing Portnoy jerkfest in Tablet. But Stephens, he commits: https://t.co/7x2i5pMUFh

At first I thought the headline was just clickbait but this Bret Stephens column is pure garbage: https://t.co/JDes59Aysa

If you’re curious about exactly how Bret Stephens is going to absolve Harvey Weinstein of moral responsibility, I’ve got you covered pic.twitter.com/APnLyJuL7p

Wow who could have predicted that Bret Stephens would find a way to defend Harvey Weinstein https://t.co/UFaTOCL5vf pic.twitter.com/dTVQUThzH1

has bret stephens ever even seen a movie about pre-60s hollywood https://t.co/e2VN3KOXYd pic.twitter.com/m3Kuxun4nL