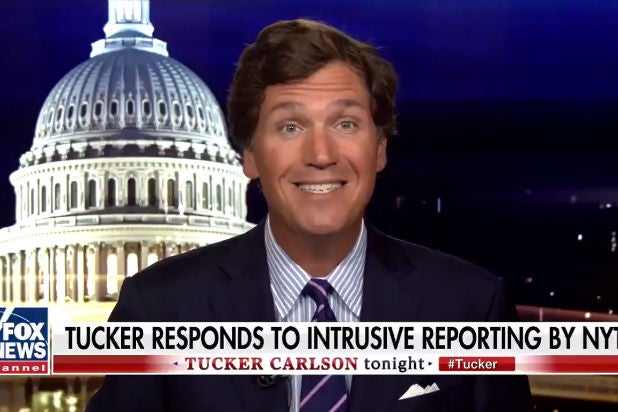 In his first night back on Fox News after a brief “vacation,” Tucker Carlson accused the New York Times of actively planning to “injure” his family through an upcoming story he says will reveal the location of his house. But shortly after, the paper said it told him before he made the accusation on the air that it is not pursuing such a story.

Monday’s episode of “Tucker Carlson Tonight” was the first since he took what he said was a “long-planned vacation” that began last Tuesday. The vacation was never previously announced, and it just happened to begin just after his head writer was forced to resign after being exposed for an online history of racist and sexist statements.

Carlson did not talk about that topic during the show, nor did he address the lawsuit made public on Monday that accuses him and fellow Fox News host Sean Hannity of sexual harassment. (Fox News has expressly denied the accusations on their behalf.) But at the end of the episode, Carlson spoke about the New York Times, which he accused of having “personal animosity” for him.

“Why is The New York Times doing a story on the location of my family’s house? Well, you know why,” he told his viewers. “To hurt us, to injure my wife and kids so that I will shut up and stop disagreeing with them. They believe in force. We’ve learned that.”

Later in the monologue, he said, “If one of my children gets hurt because of a story they wrote, they won’t consider it collateral damage — they know it’s the whole point of the exercise. To inflict pain on our family, to terrorize us, to control what we say.”

In a statement provided to The Daily Beast, the paper flatly denied Carlson’s claim and also said Carlson failed to disclose it had provided that denial to him prior to airtime. “While we do not confirm what may or may publish in future editions, The Times has not and does not plan to expose any residence of Tucker Carlson’s, which Carlson was aware of before tonight’s broadcast,” the statement said.

Watch the segment from tonight’s episode of “Tucker Carlson Tonight” below: