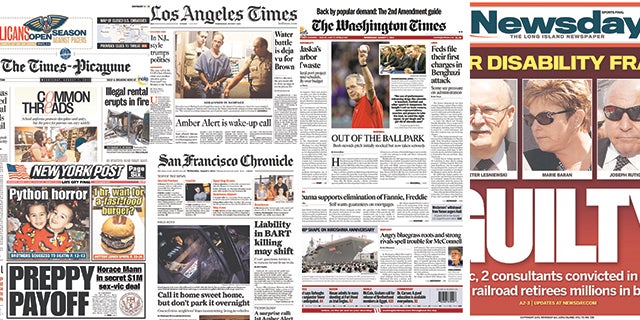 With the Washington Post and the Boston Globe changing hands, there's plenty of chatter about which will be the next to go.

Focus immediately centered on the New York Times, but Wednesday afternoon chairman Arthur Sulzberger told employees the family-owned paper was not for sale. Here are at least six more options for a billionaire interested in acquiring a new prestige plaything:

L.A. Times
Tribune's eight papers, including the L.A. Times, have been for sale for some time now, but no one's buying. This despite interest from the Koch brothers and the OC Register's Aaron Kushner in the Times; in the past, David Geffen, Eli Broad and Ron Burkle have also eyed it as a potential acquisition. While the company waits, the paper continues to wither. A smart print savior can probably buy the L.A. Times for a song — though he'll have a lot of work to do to build its decimated newsroom back up.

San Francisco Chronicle
Since it was purchased by Hearst in 1999, the Chronicle has done nothing but lose money and bleed subscribers. Though San Francisco is the 14th most populous city in America, the Chronicle — the only daily paper San Francisco has – doesn't even make the Top 25 most circulated papers in America. Plus, if you're a tech industry titan with money to burn, why not go with the Bay Area's biggest?

Also read: In the Washington Post, Jeff Bezos Buys a Billionaire's Bauble, Not a Business

The Washington Times
The conservative D.C. paper didn't make money even when the industry was doing well – rather, religious leader Sun Myung Moon founded it in 1982 as a way of spreading his message and values through the influential D.C. area, and has reportedly spent almost $2 billion on it. Moon died last year, and his heirs are reportedly not as thrilled about subsidizing the enterprise, which has been retrenching for the last few years. In 2010, a (now former) reporter said funds were so scarce the paper couldn't pay for an exterminator to get rid of the mice and snakes running rampant through the office.

New York Post
Now that News Corp.'s publishing division is its own standalone public company, it can no longer rely on revenue from its more lucrative entertainment division to buoy its troubled print titles. While Wall Street Journal is holding its own, the New York Post loses over a hundred million dollars a year, according to recent estimates. Pretty soon, Rupert Murdoch is going to have to cut his significant losses on the paper — which he was forced to sell once before — and give someone else a chance at New York's premiere tabloid.

Newsday
Cablevision purchased Newsday Media Group in 2009 for $650 million, but it loses money and Cablevision doesn't seem to know what to do with it. An attempt to extend its reach into the Hudson Valley with the online-only NewsdayNY ended after just over a year with the sudden shuttering of the site and layoffs of the entire staff. Though Cablevision execs claim they have no desire to get rid of the Long Island paper, shareholders can't possibly be happy about subsidizing it to the tune of an estimated $100 million.

All Advance papers, just all of them, please, as soon as possible
In the last few years, Advance has been on a cutting spree. Cutting staff, cutting deliveries, cutting costs and cutting any potential that the papers might be able to turn things around. New Orleans is the largest city in America to be without a dedicated daily paper since Advance cuts its Times-Picayune circulation from daily to thrice-weekly (and then back to daily again, sort of, with the April introduction of Times-Picayune Street). The Cleveland Plain-Dealer and Oregonian followed suit, with the Plain-Dealer losing a third of its newsroom staff in one fell swoop just last week. Why bother at this point, Advance? Sell your ink to someone who wants to actually print it.