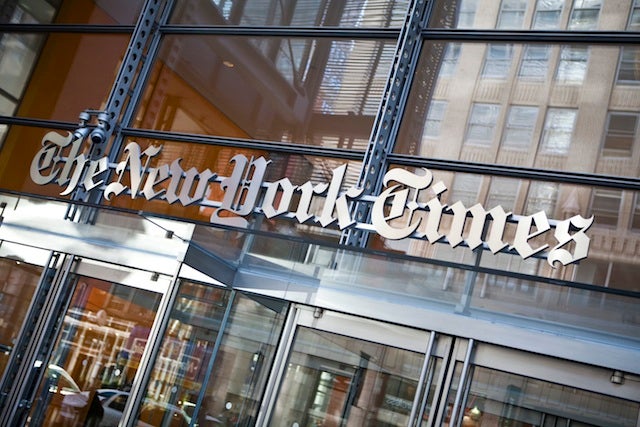 A New York appellate court on Tuesday overturned a judge's decision to grant the New York Times access to a database of New York City gun owners' names and addresses.

The decision says that a lower court erred  in 2011 in ordering the New York Police Department to release the addresses to the newspaper.

The ruling says the NYPD submitted an affidavit in which they argued that releasing the information to the Times could endanger the gun owners' privacy and safety.

"We are reviewing the decision to determine possible next steps legally," Eileen Murphy, a Times spokeswoman, said in a statement to TheWrap.

“At a minimum, the affidavit demonstrated ‘a possibility of endanger[ment]’ sufficient to invoke the exemption,” the court wrote.

The decision comes just weeks after another New York state newspaper, the Journal News, ignited a firestorm of criticism for publishing and mapping the addresses of gun owners in Westchester and Rockland counties, just north of the city.

The Journal News voluntarily removed the map from the site last month.

Last month, two of the Times' most influential columnists spoke out against the Journal News's decision to publish the map in the first place.

"It is one thing to have a public database available that lets me look up whether the neighbor I am feuding with might have a gun permit," he wrote in a column about the Journal News. "It is quite another to publish the names and addresses of all my neighbors who own guns. The decision lacked a rationale."

In an op-ed page article, former Times executive editor Bill Keller said that he feared any database was already incomplete — thanks to the new gun law — and therefore ineffective.

"The information The Journal News provided its readers is so far from complete as to be misleading," he wrote. "The public records identify only legal handguns."