UPDATED: New York Times national editor Marc Lacey responded to criticism Sunday about a feature written by Richard Fausset titled “A Voice of Hate in America’s Heartland,” explaining how the thinking about the profile of an Ohio neo-Nazi.

“Our reporter and his editors agonized over the tone and content of the article,” Lacey wrote. “The point of the story was not to normalize anything but to describe the degree to which hate and extremism have become far more normal in American life than many of us want to think.”

Lacey went on to say the paper’s editors heard “loud and clear” why some readers wanted more push back. “We regret the degree to which the piece offended so many readers,” he continued. “We recognize that people can disagree on how best to tell a disagreeable story. What we think is indisputable, though, is the need to shed more light, not less, on the most extreme corners of American life and the people who inhabit them. That’s what the story, however imperfectly, tried to do.”

PREVIOUSLY: While The New York Times has earned praise from critics of Donald Trump in the months since he took office, it became the target of contempt on Twitter this weekend after it published a profile on a white supremacist and Nazi sympathizer that many felt normalized hate in America.

Richard Fausset’s feature, “A Voice of Hate in America’s Heartland,” followed Huber Heights, Ohio, resident Tony Hovater who helped start the Traditionalist Workers Party, one of the extreme-right groups that marched in Charlottesville earlier this year.

Critics said that the profile normalized white nationalism by, among other things, describing Hovater as an avid “Seinfeld” watcher whose “Midwestern manners would please anyone’s mother.”

“The problem with this article isn’t that it’s about a Nazi but that it doesn’t add anything to our understanding of modern Nazis,” Vox founder Ezra Klein said in a tweet. “Of course racists shop at supermarkets and play in bands and enjoy Seinfeld and own cats. That evil is also banal is not new.”

Even The Atlantic made fun of the Times for its poor judgment — it’s not just snarky people on Twitter. But others were not as polite with their criticism.

Comedian Patton Oswalt mocked the column with a tweet of his own, while “Jimmy Kimmel Live” writer Bess Kalb, who is Jewish, excoriated the piece for talking about Hovater’s manners.

Jeffrey Dahmer: I made an altar from the bones and genitalia that I didn't eat from my victims.
NY Times reporter: Meet the Midwestern sex-postive locavore who adds a Goth twist to his arts and crafts!

You know who had nice manners? The Nazi who shaved my uncle Willie’s head before escorting him into a cement chamber where he locked eyes with children as their lungs filled with poison and they suffocated to death in agony.

Too much? Exactly. That’s how you write about Nazis. 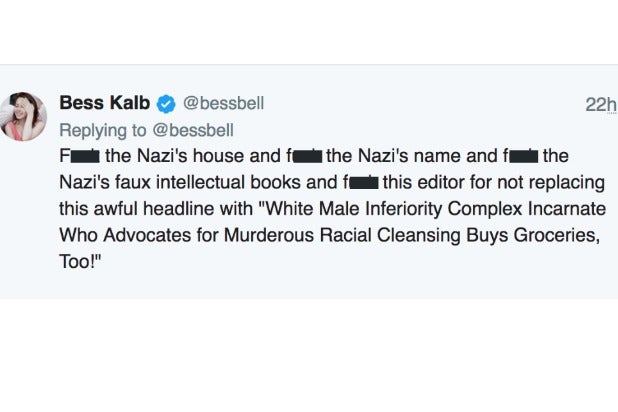 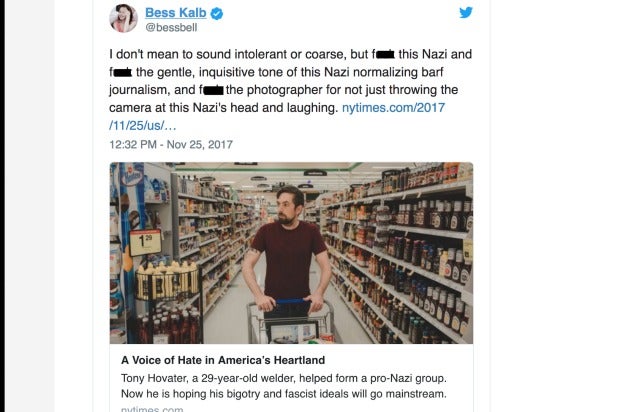 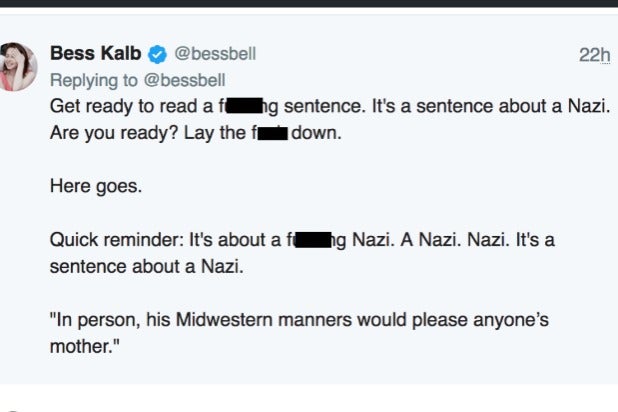 In a follow-up column, Fausset wrote that he believed his piece was flawed, saying that he failed at his goal of trying to find an explanation for why Hovater had turned to Nazism even after additional interviews. Ultimately, he decided that the absence of such an explanation “would have to serve as both feature and defect.”

But while tech writer Dan Gillmor commended Fausset for his candor, he still believed that if the writer felt this way, the piece should not have been published.

3/ It lacked depth, as the reporter acknowledges, in discussing the fascist at the story’s heart. It missed in every way.

Read more responses to the NYT article below:

Awesome parody by @TheAtlantic of that awful @nytimes “Nazis are just like us!” dreck. https://t.co/LNMYpYCOL6

I’m all for profiling Nazis if it helps show how this shit happens and shines a light on an important & terrible phenomenon, but I don’t think that means you have to profile the “model Nazis” the Nazis want profiled.

Next up from the New York Times: “The child pornographer next door — he’s a football fan, and a surprisingly good cook.”

You know what I remember before 2017? When identifying as a Nazi was so toxic you didn’t get a puff-piece write up in the New York Times. pic.twitter.com/ncpKNErRUB