Saturday’s New York Times features a front-page editorial — the paper’s first since 1920 — calling for increased U.S. regulation of guns in the wake of a nationwide rash of mass shootings.

The editorial, headlined “The Gun Epidemic,” calls for a drastic reduction in the number of firearms legally available to U.S. citizens and “eliminating some large categories of weapons and ammunition.”

“​It is a moral outrage and national disgrace that civilians can legally purchase weapons designed to kill people with brutal speed and efficiency,” the editorial board wrote.

The paper decided to break its decades-old practice of keeping the front page free of editorials “to deliver a strong and visible statement of frustration and anguish about our country’s inability to come to terms with the scourge of guns,” Times publisher Arthur Sulzberger Jr. said in a statement.

The paper’s bold move follows intensified debate over gun violence in the U.S. in the wake of the deadly assault on Wednesday at the Inland Regional Center in San Bernardino, California, that killed 14 people and injured 21 others.

On Thursday, the U.S. Senate voted down a proposed bill that would bar suspected terrorists, felons and the mentally ill from legally obtaining firearms.

The Times last published a Page 1 editorial in June 1920, according to the Times. That commentary piece decried Warren G. Harding’s nomination as the Republican presidential candidate. 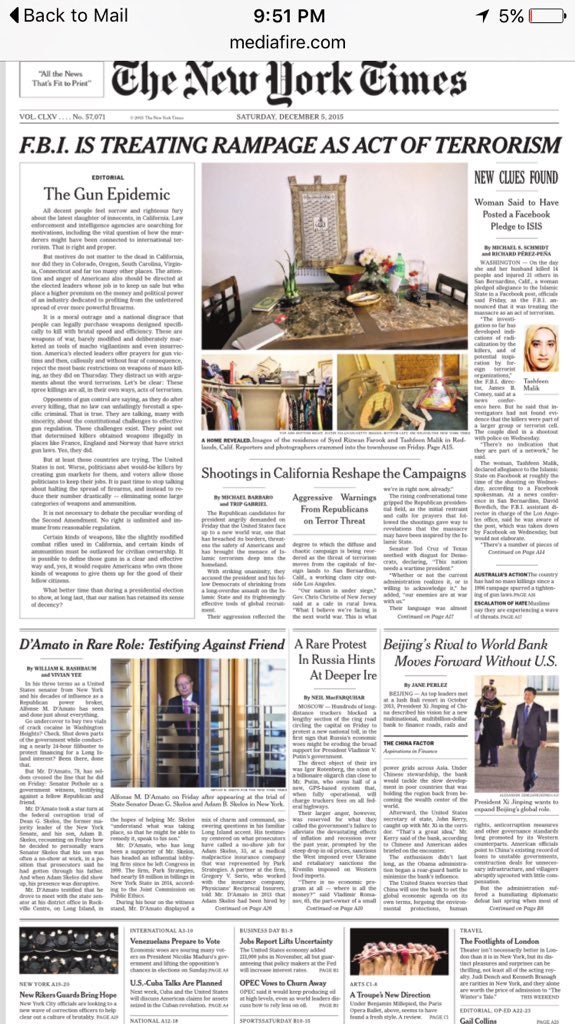