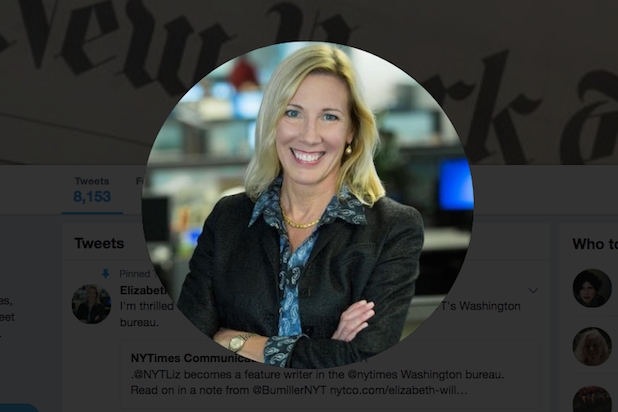 New York Times features writer Elizabeth Williamson apologized for and deleted a tweet on Thursday that was critical of her new colleague, Sarah Jeong.

“I just deleted my earlier tweet about this column. It was inappropriate,” she said in a statement. “I apologize.” Williamson also included a link to Times opinion columnist Bret Stephens’ most recent piece in which said he was willing to look past the Jeong outrage.

I just deleted my earlier tweet about this column. It was inappropriate. I apologize. https://t.co/Z6tNMHHzMD

The tweet that sparked the retraction also shared the Stephens piece, but instead of contrition, carried a sharp summary of Williamson’s thoughts on her new colleague.

“Here’s @BretStehensNYT offering a classy welcome to a colleague who has yet to prove she deserves one,” she said. An outraged mob of Jeong defenders swiftly swarmed the tweet, generating hundreds of comments. 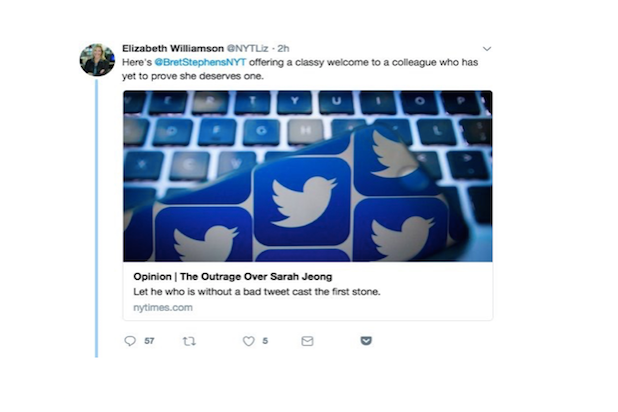 A rep for the New York Times did not immediately respond to request for comment on the matter. As a features writer, it is unclear whether Williamson, who was hired in March, is bound by the Times’ strict social media guidelines which forbid journalists from expressing opinions on the issues they cover.

“In social media posts, our journalists must not express partisan opinions, promote political views, endorse candidates, make offensive comments or do anything else that undercuts The Times’s journalistic reputation,” read one of the guidelines made public by the Times. “Our journalists should be especially mindful of appearing to take sides on issues that The Times is seeking to cover objectively.”

Also Read: Twitter's Jack Dorsey Answers What Happens if Someone Wants to Punch Sean Hannity in the Face

Opinion columnists like Stephens, however, are not held to that standard and in his piece defending Jeong, he openly called her old anti-white tweets “racist.”

Jeong, a former Verge writer was hired by the Times last week, and sparked an internet firestorm after a number of her old tweets were resurfaced. In many, she made disparaging remarks towards white people, which critics — like Stephens — said were racist.

Among the more memorable, “#CancelWhitePeople,” “oh man it’s kind of sick how much joy I get out of being cruel to old white men,” and “Are white people genetically disposed to burn faster in the sun, thus logically being only fit to live underground like groveling goblins”

In a statement, the Times distanced themselves from Jeong’s comments and said she would be more mindful in the future.

“Her journalism and the fact that she is a young Asian woman have made her a subject of frequent online harassment. For a period of time she responded to that harassment by imitating the rhetoric of her accusers,” the Times said.

“She now sees that this approach only served to feed the vitriol that we too often see on social media. She regrets it, and the Times does not condone it.”

In other old tweets Jeong also criticized in personal terms her new Times editorial board colleagues including Thomas Friedman, Paul Krugman and David Brooks. She has faced no pressure to apologize to them and no mob has thus far coalesced to pressure the Times to make her.