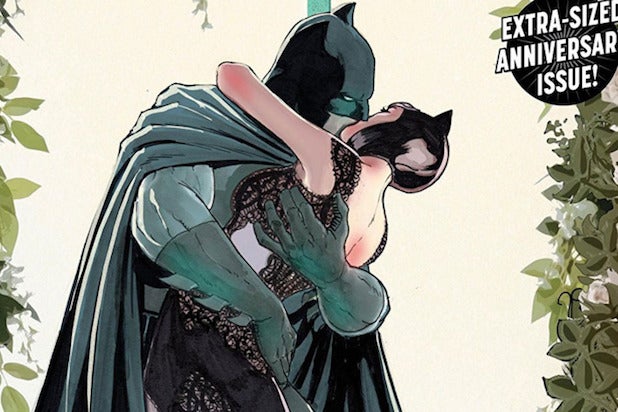 (Spoiler alert: Definitely do not read if you don’t want to know the details of Batman No. 50.)

Well, if you were looking forward to reading about the much-anticipated wedding of Batman and Catwoman in “Batman” Vol. 3, No. 50, we really hope you stayed away from the New York Times Style section on Sunday. Specifically the “Vows” section, as that is where comics correspondent George Gene Gustines’ story about the Bat-Cat nuptials spoiled the ending to the story 78 years in the making, literally with just the headline.

That headline: “It Just Wasn’t Meant to Be, Batman.”

And if the headline didn’t do the trick, in the article, Gustines revealed that Catwoman stands her almost-hubby up at the altar, finishing off his piece with this kicker: “Theirs is a story that is forever to be continued.”

Then, to make matters worse, DC tweeted it out.

So, after comic book fans everywhere had a giant meltdown, Gustines explained in a statement first provided to Vulture why he published the story — which was written with DC’s participation — the way he did. (Though he added, “They did not know how I would approach it, but they knew I would reveal the twist.”)

“After I pitched the story, I learned the wedding would not happen,” Gustines said. “It seemed disingenuous to write the story without revealing the ending, which is why I included the reveal. But I should’ve asked for a non-spoiler headline. We should have given more thought so that the casual reader, flipping or scrolling through the Style section, would not know the twist by reading the headline.”

DC Comics did not immediately respond to TheWrap‘s request for comment.

See Gustines’ statement in full below.

I’ve been passionate about covering comics for the paper for nearly 20 years and this story has been a roller coaster. I think Tom King, Mikel Janín and everyone involved in the comic did a stellar job on this milestone issue. But if I had a ‘Legion’ time bubble, I would handle it differently.

I was aware of the marriage storyline for a while – I’ve been following King’s Batman since the beginning – but I was not sure how to approach covering it, if at all. DC reached out to me about whether the event could be featured in our wedding pages. I thought it was a fun idea and pitched my editors.

I approached it like a typical “Vows” column – write about the story of the couple and what their big day is like, which is what I tried to capture in the piece, which quotes only dialogue from the comic and not the creative team, which is more typical of my reporting.

After I pitched the story, I learned the wedding would not happen. It seemed disingenuous to write the story without revealing the ending, which is why I included the reveal. But I should’ve asked for a non-spoiler headline. We should have given more thought so that the casual reader, flipping or scrolling through the Style section, would not know the twist by reading the headline.