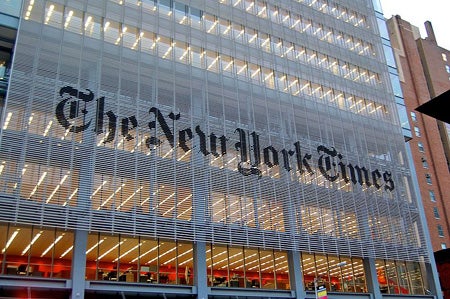 Not much news out of the New York Times at J.P. Morgan Media Conference in Boston today.

But for those metered wall completists, here’s a bit: digital VP Martin Nisenholtz said the company will announce specifics — including pricing — toward the latter part of the year.

The company already announced that it is making part of its Web site paid in January 2011. (Nisenholtz reiterated that the homepage will remain free.)

President and CEO Janet Robinson: "Based on what we have seen to date, we continue to expect year-over-year revenue trends for the second quarter for print advertising to improve from the levels of the first quarter, while digital advertising is expected to trend similarly to the first quarter, with increases from 2009 in the high teens."

While we will remain diligent in managing our operating expenses, we expect that through the remainder of 2010 year-over-year cost savings will moderate, in part because we will be cycling past several major expense-reduction initiatives implemented in mid-2009, we reinstated many of the salary rollbacks implemented in the second quarter of 2009, and newsprint prices are currently rising. We do expect to manage our operating cost base such that we will adjust expense levels to offset any revenue declines through the remainder of the year.

Given recent announcements of additional price increases by suppliers, we expect newsprint price comparisons to be slightly favorable in the second quarter and unfavorable in the third and fourth quarters of 2010.