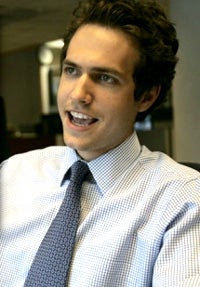 A.G., who joined the Times in February 2009, has been named Kanasas City correspondent, reporting to Midwest Bureau chief Monica Davey.

"KC is smack in the middle of a sprawling swath of the country that is crying out for more journalistic attention," National editor Rick Berke explained in a memo announcing the move.

Here’s Berke’s memo in full (via the Observer):

Arthur G. Sulzberger will be our new Kansas City correspondent. He will report to Monica Davey, our Midwest Bureau chief, and to editors in New York.

Arthur may be hard pressed to find vegetarian food amid all the barbecue joints, but he’ll have no trouble finding stories. He has an eye for spotting unusual and compelling tales, and bringing them to life with deep reporting and lively writing.

After his arrival at The Times in early 2009, Arthur spent a year as a general assignment reporter working primarily for City Room and, more recently, covering federal court in Brooklyn. From 2006 through 2008, Arthur was a local government reporter at The Oregonian in Portland. Before that, he was at the Providence Journal, where he covered two small coastal communities. His first job in journalism was as a high school intern for the Amsterdam News in Harlem. He graduated from Brown in 2003 with a major in political science.

Beyond the fact that KC is smack in the middle of a sprawling swath of the country that is crying out for more journalistic attention, it is a charming city that is purported to have more fountains than any city but Rome. Arthur, no stranger to the region, knows all that. His grandmother, who lives in Topeka, will perhaps be even more excited than we are on National.

Arthur will continue his Metro beat through the summer, and then head westward.