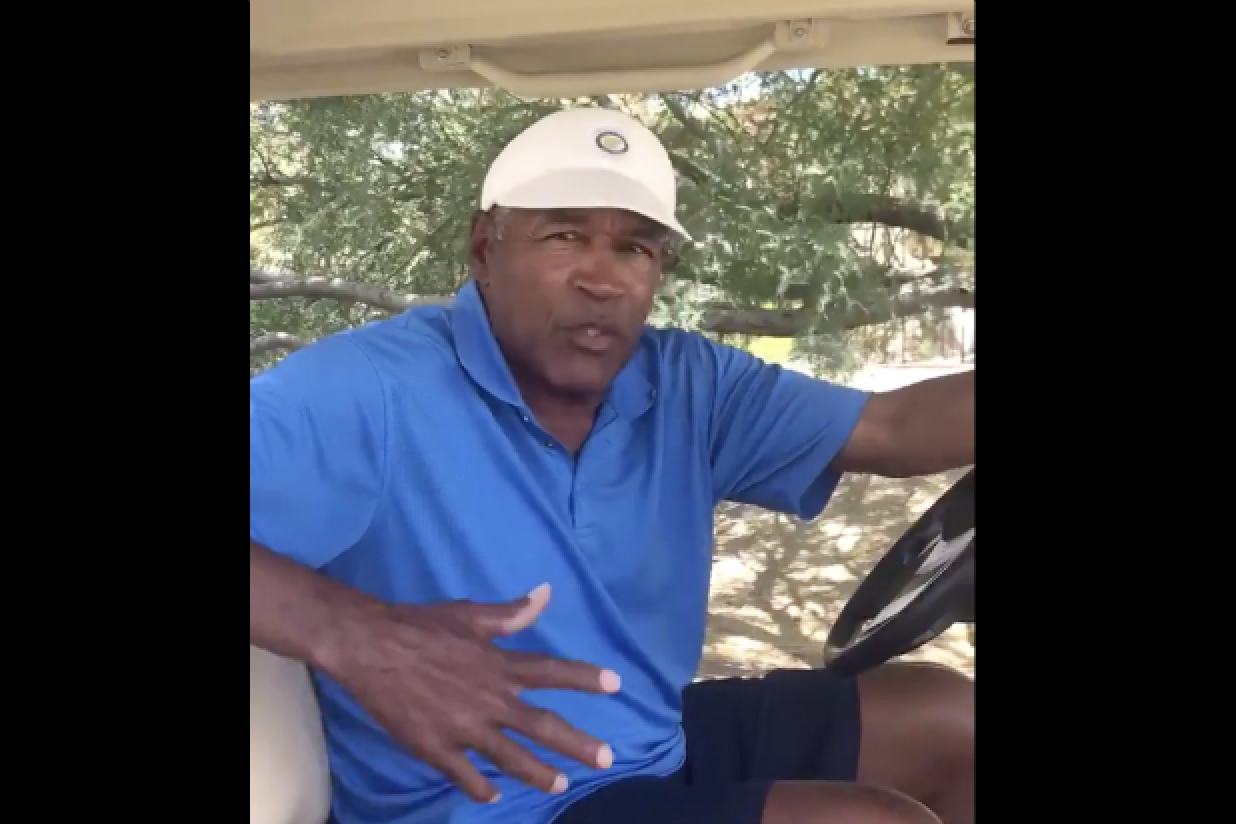 O.J. Simpson marked the 10th anniversary of Michael Jackson’s death by describing a time when he said Jackson invited him and his kids up to his home at Neverland Ranch because Simpson’s house was “under siege by the media.”

In a video recorded in a golf cart and posted to his new Twitter feed Tuesday, Simpson didn’t provide any dates. But he did provide clues that would indicate that the Neverland visits took place in the mid-’90s, after Simpson was acquitted of killing his children’s mother, Nicole Brown Simpson, and her friend, Ron Goldman.

Jackson had legal issues of his own at that point: A few years earlier, he had paid roughly $20 million dollars to settle a molestation claim.

“My house was under siege by the media and I had somehow got out, and I was staying at (former NBC executive) Don Ohlmeyer’s house when I was getting my kids on the weekends… Don had a great house, but… it was restrictive,” Simpson said in the video.

“Michael found out, he called me, he said, ‘OJ! You’ve gotta take the kids up to Neverland Ranch, they’d love it!’ And I did. And it was wondrous. The kids would come up, they would bring some of their friends, it was so great that I started bringing my adult friends up there. Michael was never there, but he always had gifts for the kids,” Simpson said.

Simpson added that he didn’t know much about Jackson’s “private life.”

“What I do know is my experience with him, is that he was a kind and generous soul,” Simpson said. “Rest in peace, Michael.”

Simpson’s detail about “getting my kids on the weekends” helps establish the timeline of his story.

As CNN reported in 1996, Nicole Brown’s parents, Lou and Juditha Brown, cared for Simpson and Nicole’s children, Sydney and Justin, while Simpson was on trial for the murders, which took place on June 12, 1994.

Simpson was found not guilty on Oct. 3, 1995, and was given the right to see his children on weekends. As CNN reported, “the acquittal… put Simpson back into their lives with weekend visits,” and led to “a custody battle with Nicole’s parents.”

Simpson won permanent custody of Sydney and Justin in December 1996, when they were 11 and 8, respectively.

Simpson also described how he met Jackson and said they did charity work together to help children with cancer.

In 2003, Jackson was charged with molesting a young cancer survivor, and acquitted. The circus-like atmosphere of his trial drew many comparisons to the spectacle around Simpson’s trial.

Jackson, like Simpson, was found not guilty. He always denied molesting children, and Simpson has always denied being a murderer.

But Jackson’s legacy was further complicated earlier this year with the release of the documentary “Leaving Neverland,” in which two men said Jackson molested them for years when they were children, including at Neverland Ranch.

Simpson was sentenced to nine to 33 years for armed robbery and kidnapping after a 2007 standoff at the Palace Station hotel in Las Vegas, where Simpson said he was trying to recover sports memorabilia he said had been stolen from him. He was released in the dead of night on Oct. 1, 2017.

Simpson started sharing his thoughts on Twitter on June 14, days after the 25th anniversary of the night Brown and Goldman were killed.