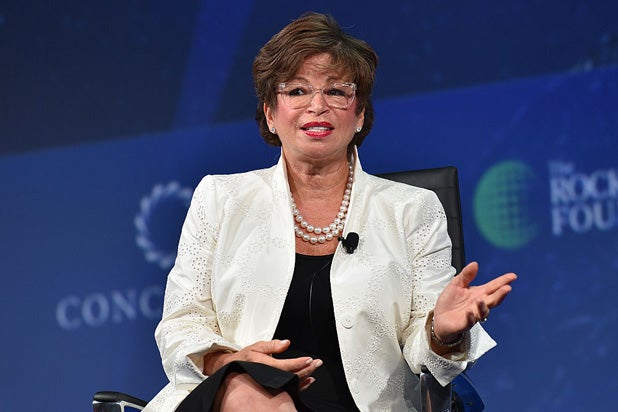 In a room full of megawatt stars and some of the entertainment industry’s preeminent shot-callers, former President Obama senior adviser Valerie Jarrett received one of the loudest welcomes. After all, Hollywood loves nostalgia — especially when the current person in office is Donald Trump.

“I think people feel different about him now,” Jarrett said, referring to her ex-boss, to rousing laughter and applause at CAA’s first-ever Amplify conference at the Montage Laguna Beach.

With her departure from Washington permitting her from airing her true feelings, Jarrett also took aim at what she perceived as the beltway establishment’s counterproductive risk-averse nature.

Also Read: Ava DuVernay Says She 'Walked in There Like a White Man' to Pitch 'A Wrinkle in Time' to Disney

“I saw a complete lack of courage in Washington to tackle some of our biggest challenges,” she said.

Jarrett was joined in a discussion by Warner Bros. CEO Kevin Tsujihara, who shared his family story — which included his grandparents having their property confiscated and forced into a Japanese-American internment camp, where his father also grew up — and where they faced plenty of racism.

“My parents told me there were Chinese kids that would put ‘I’m Chinese’ on their shirts because they didn’t want to get mixed up with Japanese,” Tsujihara said.

Tsujihara said there were things he brought to the studio that might not have happened with a chief with a different background — although there was some second-guessing.

Tsujihara said he was initially reluctant to do the documentary because he didn’t want to make it look like he was putting his finger on the scale, but he reconsidered because he had a platform “and it was a story that needed to be told.”

Jarrett acknowledged that when it became apparent Obama could actually become the president, there would be a “peculiar amount of scrutiny” his team would be under, so everything had to be nailed down precisely.

“We were really mindful of scrubbing and vetting and making sure everyone’s background was squeaky clean, because we’re only as strong as the weakest link,” she said.

But as the country — or at least some of it — grew accustomed to an African-American president, Jarrett said it became less of a “shock” to the system. To that end, she relayed a story about a friend’s five-year-old daughter who drew a picture of Hillary Clinton, and made her brown.

“Her daughter said, ‘I think you have to be brown to be president,'” Jarrett said.

Los Angeles Clippers coach Doc Rivers took the stage next and captivated the hundred-something luminaries in the audience with his talk about leadership. It got personal, as he recounted his first meeting with his team after audio of former owner Donald Sterling making racist comments surfaced in 2014.

“It took me an hour to get dressed,” Rivers said. “I kept putting my Clipper shirt on and taking it off. I didn’t know what I wanted to represent.”

Rivers said he walked into the meeting room and saw his players with their arms crossed, staring at their phones. He then commanded them to put their “f—ing phones away” — the moment he said he became a leader. Rivers then shared his life story, including when he had his house set on fire “because I was black.”

Rivers said the NBA’s strength is in its diversity, joking that “we would play JJ Kunta Bernstein if it helped us win.” Jarrett had a more serious take on the importance of letting different faces into the room — and listening to them.

“If you are not diverse and you are not listening to all voices and have your ear to the ground, you’re not going to make the best decisions,” Jarrett said. “And there’s too much at stake.”