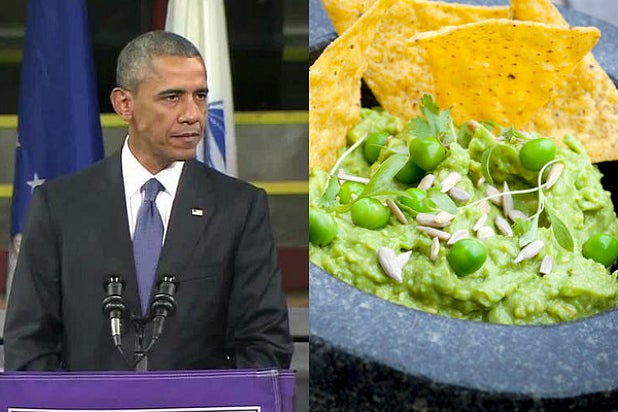 The Internet has united for one very important cause: keeping peas out of guacamole.

President Obama joined other Americans in voicing concern on Twitter Wednesday, stating he prefers the “classic” arrangement over a green pea guacamole recipe proposed by the New York Times.

The topic has crossed party lines, mimicking the same cultural trajectory as the infamous dress (which is obviously blue and black) debate back in February. Democrats and republicans alike are siding with the President, along with actors and other notable folks.

“Peas in guacamole?! We fought two world wars and invented a space program so we could have this world?” Wil Wheaton asked the Twittersphere.

Critics, however, are not finding humor in the story. Piers Morgan, for instance, is unhappy that Obama is weighing in on this issue and not others.

Peas in guacamole?! We fought two world wars and invented a space program so we could have this world? WTF. — Wil Wheaton (@wilw) July 1, 2015

If you put peas in your guacamole then I am so sorry, but we cannot be friends. I wish you well on your journey and hope you seek help. — Alex Alvarez (@soalexgoes) July 1, 2015

President Obama prefers to answer a question about peas in guacamole than my question about guns. Sad. #AskPOTUS — Piers Morgan (@piersmorgan) July 1, 2015

100,000 people in U.S. get hit by gunfire a year, Mr President @POTUS. I don’t care about guacamole recipes. What will you do about guns?