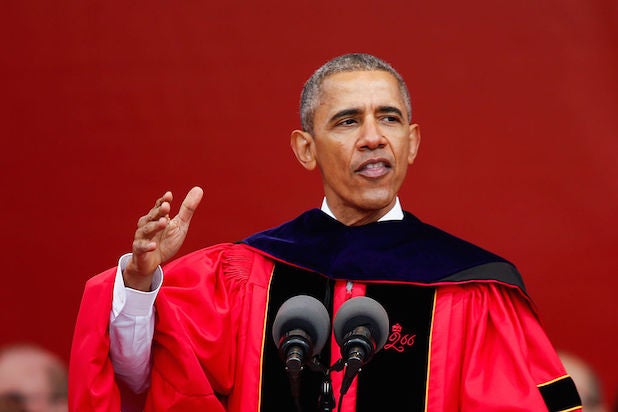 Former President Barack Obama, during the first of two virtual commencement speeches he will give on Saturday, said the coronavirus pandemic has highlighted a lack of political leadership during the crisis.

“More than anything, this pandemic has fully, finally torn back the curtain on the idea that so many of the folks in charge know what they’re doing,” Obama said during his speech. “A lot of them aren’t even pretending to be in charge.”

While Obama didn’t mention President Trump by name — or any other national or global leaders — his remark comes on the heels of saying earlier this week that the Trump administration’s handling of the pandemic has been “anemic and spotty.” Obama added the pandemic “would have been bad even with the best of governments” in place.

Obama’s commencement address was delivered online and aimed at graduates of historically black colleges and universities, covering 78 schools and more than 25,000 students. The ex-president acknowledged the “timing is not ideal” for the graduates, as the pandemic has killed more than 87,000 Americans and decimated the global economy.

Obama said the pandemic has been especially devastating to black Americans, while also referring to the killing of Ahmaud Arbery, a 25-year-old black man who was shot and killed earlier this year by two white men in Georgia while he was jogging. The two men behind Abery’s shooting were arrested last week on murder and aggravated assault charges.

“And let’s be honest — a disease like this just spotlights the underlying inequalities and extra burdens that black communities have historically had to deal with in this country,” Obama said. “We see it in the disproportionate impact of COVID-19 on our communities, just as we see it when a black man goes for a jog, and some folks feel like they can stop and question and shoot him if he doesn’t submit to their questioning.”

The speech was the start of a busy graduation season for Obama and former First Lady Michelle Obama. Later on Saturday, Obama will join Zendaya, Megan Rapinoe, the Jonas Brothers, Olivia Wilde, Ben Platt, and Lena Waithe — among other celebrities — for  “Graduate Together,” a commencement event being put on by LeBron James Family Foundation, the Entertainment Industry Foundation and the XQ Institute.

“Graduate Together” will air live on Saturday, May 16, on ABC, NBC, Univision, CBS, Fox, Freeform, CNN, and MSNBC.  On the broadcast networks, the ceremony will air in primetime in your local time zone: 8 p.m. on the east and west coasts, and at 7 p.m. in the Central and Mountain time zones. And on cable and via streaming, the show will start at the same time everywhere, at 8 p.m. ET/5 p.m. PT.

Here’s more information on how to watch or stream the event.

Next month, Michelle and Barack Obama will headline YouTube’s graduation event, which will also feature Condoleezza Rice and Lady Gaga.