The love affair between President Obama and Hollywood took a spring swoon on Saturday night, as dozens of celebrities filled the Washington Hilton Hotel ballroom for the White House Correspondents Association Dinner. 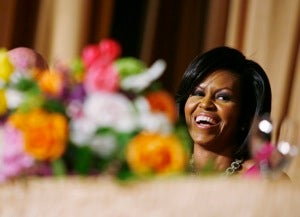 (See slideshow of the Obamas and the star-studded crowd.)

“Most of you covered me,” the president told the room filled with journalists, pols and celebrities. “All of you voted for me.”

It was probably true. Obama’s supporters in the entertainment industry and the press made the evening a lopsided lovefest. Demi Moore and Ashton Kutcher looked as if they’d practically faint from giddiness.

As always, the roster included luminaries from Brian Williams to George Lucas to Rahm Emanuel to William H. Macy. But the tension that usually exists between the White House and the press corps seemed missing.

Not since the long-ago early 1990s when William Jefferson Clinton reigned in his  first four years was this sort of puppy love on display. During the Bush administration, the celebrities showed up – but more for the parties, not for W.

Obama got it. After a brief recap of his accomplishments in his first 100 days, the president outlined his immediate plans.

“In the next 100 days I will strongly consider losing my cool,” he said. “My next 100 days will be so successful I will be able to complete them in 72 days. And on the 73rd day I will rest.”

Where to go from here?

Wanda Sykes, a misanthrope if there ever was one, had quite the job to introduce a little acrimony into the place.

“This is truly an honor to be here,” she began, inauspiciously.

“It’s hard to poke fun at the president,” she went on. “He’s so likeable. Everywhere are t-shirts and bumper stickers…. People love you. And even the media. You guys have been very favorable toward the president. “

“They never catch you smoking,” she observed, turning to Obama. “but they always catch you with your shirt off.  I don’t need to see your nipples. Is there a beach at Camp David, what the hell? There’s no nipple portrait of Lincoln, sorry.”

So Sykes went on to poke fun at the loquacious vice president, warning that, “God forbid Joe Biden falls into the hands of terrorists. We’re done. They won’t have to torture him. All they’ll have to do is say, ‘How’s it going, Joe?’ ‘Did you waterboard him?’ ‘No, I just said, ‘nice weather. He’s still talking.’”

She chided Michelle Obama for patting Queen Elizabeth on the back “as if she’d just slid into home plate. You can’t do that.”

But ultimately, Sykes fell back on where all the good comic material still lies – with the last administration.

“President Bush knows how to leave town,” she observed. “He left like that houseguest who broke something in your house, and gets out of there before you find out.”

She noted that former Vice Presidential candidate Sarah Palin had pulled out of the evening. "Someone should tell her, that’s not how you really practice abstinence," Sykes said.

And she saved her harshest words for Rush Limbaugh, the liberal establishment’s poster child for out-of-touch, overweening, hypocritical right-wingers.

“Rush Limbaugh said he hopes the administration fails,” she said. “That’s like saying, he hopes the country fails. He just wants the country to fail. That’s treason. He’s not saying anything different than Osama bin Laden.”

She continued: “I think Rush Limbaugh was the 20th hijacker, but he was so strung out on Oxycontin he missed his flight.”

The crowd laughed and groaned uncomfortably.

“Too much?” she asked. “You’re laughing inside.”

The name’s truer than they think. Where else do grownups wage popularity contests to score the best table locations? Wear tuxedos that have never met a tailor and flammable rayon gowns that taunt lit matches? And recruit such random Hollywood names that you almost expect Davy Jones to arrive with Marcia Brady?

I’ve attended the huge Washington Hilton gala for years, when it’s been sublime (with President Bush and the press equally pissed at then-rising star Stephen Colbert’s routine) and surreal (in 2007, when Rich Little channeled Nixon to a crowd that barely remembered either of them).

It’s a chance to rub elbows with — and observe the eating habits of — everyone from Madeleine Albright to Leon Panetta….read the rest here.