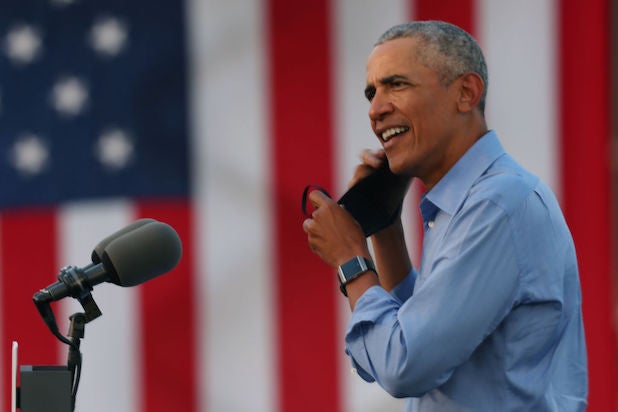 Former President Barack Obama believes he would have gotten very different treatment from Fox News if he had a “secret Chinese bank account” like Trump.

“Listen, can you imagine if I had had a secret Chinese bank account when I was running for re-election? You think Fox News might’ve been a little concerned about that? They would’ve called me ‘Beijing Barry,'” Obama said at a rally for Joe Biden in Philadelphia on Wednesday night. “It is not a great idea to have a president who owes a bunch of money to people overseas. That’s not a good idea.”

A rep for Fox News did not immediately respond to TheWrap’s request for comment.

In another analysis of Trump’s tax returns, the New York Times reported on Tuesday that President Trump has a previously undisclosed bank account in China, held by Trump International Hotels Management L.L.C., that “paid $188,561 in taxes in China while pursuing licensing deals there from 2013 to 2015.” An attorney for the Trump Organization told the Times the company opened the account “to pay the local taxes” after creating an office in China “to explore the potential for hotel deals in Asia” and that the bank account has “never been used for any other purpose.”

Also Read: Trump Hates Obama So Much He Hired a Stand-In He Could Fire, Michael Cohen Says (Photo)

Obama also zeroed in on Trump’s tax records, which showed that Trump paid $750 in federal income taxes during the first year of his presidency.

“I mean, of the taxes Donald Trump pays, he may be sending more to foreign governments than he pays in the United States. His first year in the White House, he only paid $750 in federal income taxes,” Obama said. “Listen, my first job was at a Baskin Robbins when I was 15 years old. I think I might’ve paid more taxes that year working … dispensing ice cream. How is that possible? How many people here paid less than that?”

Take a look at the clip from the rally here.