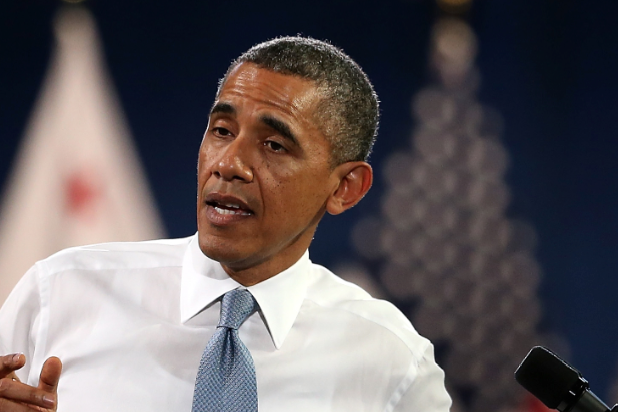 President Barack Obama’s poll numbers may be down, but he’s still a big draw in Hollywood.

A dinner at the home of Saban Capital Group CEO Haim and Cheryl Saban included 120 attendees. Among them were Ambassador Nicole Avant and Sarandos, Los Angeles Mayor Eric Garcetti, Hanks and Wilson, and Reiser.

Haim Saban used his four-minute introduction of the president to praise Obama and rip critics who focus on problems with the Obamacare website while ignoring Obama’s accomplishments.

“We’re out of Iraq. We’re out of Afghanistan and the military and intelligence cooperation with Israel – our staunchest ally in the Middle East, arguably in the world, has never been deeper,” he said.

Saban, who had dinner with the President at the White House last Friday, also teased the president about the lack of valet parking there – and offered to pay for it.

“We had a wonderful time – great food, great company, very inspiring. No valet parking! You know what? I had to walk to the White House. We have valet parking at the Sabans! So, Mr. President, if you would, please, thank you. Taxpayers’ money? I’ll fund it, no problem,” said Saban.

“So much of what we do is measured through the prism of politics and on any given day, the notion is that who’s up and who’s down and what’s on cable television, should drive our sense of direction,  sometimes even our sense of what’s right and what’s wrong,” he said. “But when you meet a family who tells you that their kid is alive today because they got an early diagnosis because they could finally go to a doctor where they couldn’t before, I don’t need a poll to tell me that’s the right thing to do.”

Not everyone as been as welcoming as celebrities. In Los Angeles, opponents of the Trans Pacific Partnership trade agreement staged a rally. And in a San Francisco speech Monday, Obama was interrupted by a protester who demanded he immediately halt deportations of illegal aliens. Obama said he couldn’t do that without authorization from Congress.

On Tuesday, visual effects workers are planning to rally outside of DreamWorks Animation, where the president is scheduled to address the entertainment industry’s contributions to the economy.