The Federal Communications Commission’s only incumbent Republican, Robert McDowell, will be staying another term.

President Obama today announced his intent to reappoint McDowell, a former telecom association executive and lobbyist, who was sworn in June 1, 2006, as an FCC commissioner, to a full five-year term. 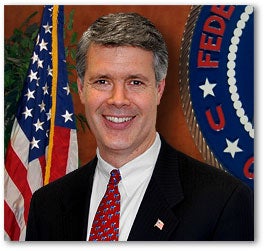 The move could speed Senate confirmation of the President’s choice of Julius Genachowski as FCC chairman. That nomination has been in limbo awaiting a hearing by the Senate Commerce Committee.

Now that committee will likely schedule a confirmation vote on Genachowski, a Democrat, to be chairman, Democrat Mignon L. Clyburn to be a commissioner and McDowell all at the same time.

Committee officials did not return a call asking for comment.

As a member of the FCC, McDowell has been outspoken in pushing to ease some of the FCC’s media ownership rules that limit cross ownership of broadcast stations and newspapers in the same market — something Democrats on the commission have opposed.

At the same time, he worked closely with Democrats on the Digital TV transition, going to the point of criticizing the FCC under former chairman Kevin Martin.

In a statement today, the President praised McDowell’s willingness to work across the party aisle.

“He has collaborated with his fellow commissioners to develop and establish American communications policy covering the wireless, media, and Internet industries, in addition to international policy matters,” said the President’s statement.

“Among other matters, he has worked to create rules governing wireless auctions; establish a framework for unlicensed use of TV ‘white spaces’ spectrum; develop incentives to encourage the development of new broadband technologies; review public interest benefits as part of the approval process of proposed corporate mergers; and adjudicate enforcement proceedings.”

When the new Congress arrived in January, Republican FCC commissioner Deborah Taylor Tate, who had been serving a recess appointment and was never confirmed, lost her seat. Then Martin left in January.

So far with the FCC focused on working out kinks in the digital TV transition due to take place June 12, the shortage of commissioners hasn’t caused any major problems or delays.

The shortage, however, is about to become acute. Democratic commissioner Jonathan Adelstein, who has been appointed by President Obama to be administrator of the Department of Agriculture’s Rural Utilities Service, will leave when he is confirmed by the Senate to the new job.

Adelstein will be in charge of allocating billions of dollars of stimulus money aimed at expanding rural broadband.

The reappointment of McDowell quickly drew praise in Congressional quarters and broadcasting circles.

“Robert McDowell will provide continuity for many important issues on the FCC, including the upcoming digital television transition,” said Sen. Kay Bailey Hutchison, D-Texas, the ranking Republican on the Senate Commerce Committee.

The National Association of Broadcasters also saluted the appointment.

“We have deep respect for Commissioner McDowell. His good humor and open-minded approach to issues facing the Commission have served the public well, and we look forward to working with him during his second term," Said Dennis Wharton, the organization’s executive VP.