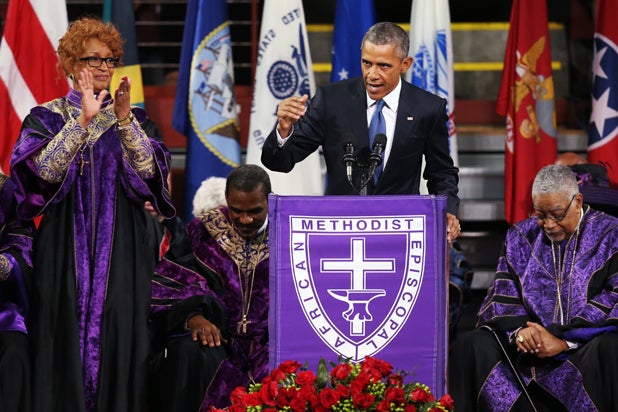 “We are here today to remember a man of God who lived by faith,” the president said. “A man who believed in things not seen. A man who believed there were better days ahead, off in the distance. A man of service who persevered knowing full well he would not receive all those things he was promised, because he believed his efforts would provide a better life for those who followed.”

The president recounted meeting Pinckney when both of them were a little bit younger: “What I noticed was his graciousness, his smile, his reassuring baritone, his deceptive sense of humor,” Obama continued, recounting a man whose community loved and needed him.

In the middle of his eulogy, the president led the church chorus in “Amazing Grace,” as close to 6,000 people joined together in song. Obama also addressed gun violence head on: “For too long we’ve been blind to the unique mayhem that gun violence inflicts on this nation,” the president said about gun violence.