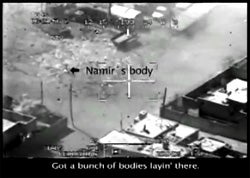 Two days after footage showing the killing of Iraq civilians and two Reuters journalists by a U.S. Army helicopter was leaked, the International Federation of Journalists is urging President Obama to open a “fresh investigation” into the case.

"This is evidence of calculated, cold-blooded and horrifying violence," IFJ Jim Boumelha said in a statement. "The United States cannot ignore this atrocity and the killings of unarmed civilians. We insist on a completely new review of these and all the killings of journalists and media staff in the Iraq conflict."

The IFJ claims there have been 19 “unexplained killings of media staff at the hands of U.S. soldiers” since the conflict began.