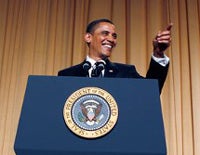 Barack Obama did Conan O’Brien a solid on Saturday night.

Obama took a dig at Jay Leno, host of the White House Correspondents’ Association dinner. The president referred to Leno as "the only person whose ratings fell more than mine."

Steven Spielberg came with Michelle Pfeiffer and David Kelley in tow; Universal chief Ron Meyer sat beside Jon Bon Jovi. And everybody from "Modern Family" was there.

The event is now referred to as the "Nerd Prom", a phrase coined by now-GQ blogger Ana Marie Cox. (Check it at #nerdprom on Twitter.)

“I’m also glad I’m speaking first," Obama said "because we’ve all seen what happens when you take the time slot after Leno."

He also got in some jokes at the expense of the vice president. "This is no ordinary dinner," Obama said. "This a big f—ing deal."

For his part, Leno tossed a few zings back at Barack: "We can point to one achievement during his administration — we did get one astronaut on ‘Dancing on the Stars.’"

Of Michelle Obama, Leno said: "There are few things more important to find and harder to keep than love — well, love and a birth certificate."

"A lot of Republicans couldn’t be here tonight because it is dollar drink night at the bondage club," Leno said.

He added: "I can’t wait to get back to Hollywood where people have values."