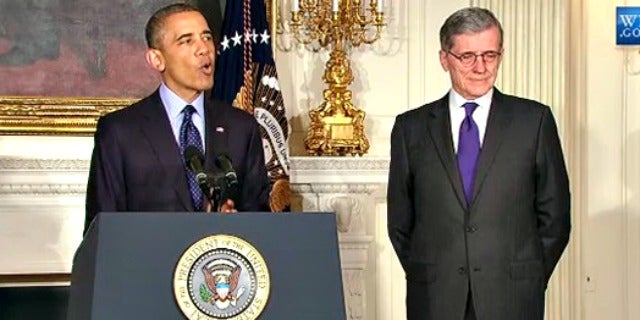 President Obama’s choice as new chairman of the Federal Communication Commission, Tom Wheeler, faces a Senate confirmation hearing Tuesday amid initial indications the Senate will try to move quickly to confirm him as the permanent replacement for now departed chairman, Julius Genachowski.

Members of the Senate Commerce Committee will hear testimony from Wheeler, though a final committee vote on the confirmation may come later this week or next week. How quickly the full Senate will take up the nomination remains uncertain. Republican senators have blocked votes on several other Obama appointees.

Managing director of Core Capital Partners, Wheeler is a former lobbyist as well as a bundler for Obama’s presidential campaign, helping the campaign raise funds. He also served on Obama's transition team.

More recently Wheeler has been a venture capitalist and co-founder of the SmartBrief, a targeted news service about the media industry

Wheeler blogged or wrote a “Wireless Musings” column about the telecommunications industry from 2007 through 2012. Some of the comments made in the blogs, especially those in a column he wrote in April, 2011 about what the FCC should do in considering AT&T’s bid for Deutsche Telekom’s T-Mobile USA, are expected to provide major fuel for senators’ questions at the hearing.

In the column, Channeling Nathan Kingsbury, Wheeler suggested the FCC should approve the deal – the FCC and the Justice Department eventually rejected it -and use it to get major concessions on net neutrality or other issues.

Some Republican aides have raised questions about whether that stance could make Wheeler more aggressive in pursuing net neutrality, which a number of Republicans on the committee do not support. Democrats, meanwhile, may question whether Wheeler, given his long industry background, might be too willing to accept industry arguments.

The choice of Wheeler has generally been praised by industry groups and several consumer groups.