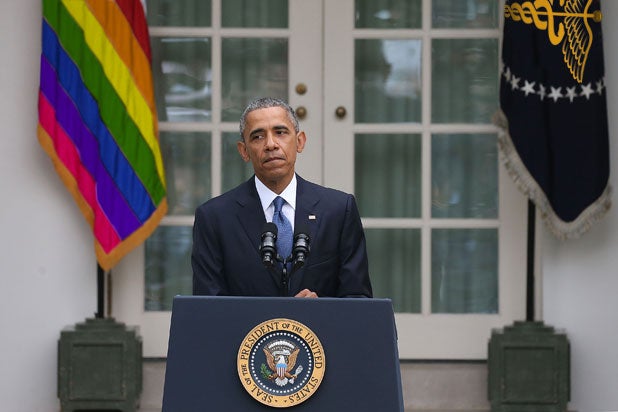 President Obama’s legacy landed with the force of a “thunderbolt” this week, as the Supreme Court cemented into history two major shifts in policy — expanding health care and extending marriage equality — that will impact American society for centuries to come.

“Progress on this journey often comes in small increments,” the president said in the Rose Garden on Friday, after the Supreme Court upheld the right to marry for gay and lesbian couples. “Sometimes two steps forward, one step back, propelled by the persistent effort of dedicated citizens. And then sometimes there are days like this, when that slow, steady effort is rewarded with justice that arrives like a thunderbolt.”

Marriage equality has arrived with nothing short of stunning speed. We went from two states supporting same-sex marriage at the start of Obama’s tenure to 37 states before this week — to now making it the law of the land. Less than a generation removed from Clinton-era “don’t ask, don’t tell” military policy, a conservative Supreme Court justice just pronounced that the “dignity” of marriage must be extended across gender preferences.

What a shift. This, in the same week that the Supreme Court declined to roll back the tide on Obamacare, preserving medical insurance for more than six million Americans and frustrating the efforts of a Republican-led determination to reverse course.

Because society had already moved on regarding both issues. Gay couples everywhere have married, raised children and become part of the fabric of their respective communities. Expanded, government-funded health care has settled in and become part of Americans’ everyday realities.

The court merely caught up to our new normal, and the Obama era — in which we elected an African-American president and then watched the right-wing half of the country (also known as Fox News) tie itself into knots dealing with that reality — will be credited with it. (One is tempted to wonder what timetable might have held sway had Al Gore been handed the presidency in 2000 instead of George Bush. But we resist such temptations.)

It’s entertaining to observe the mental gymnastics of Republican candidates as they struggle to find words that both support our law-based democracy and a Supreme Court decision they can hardly believe. Right-wingers who have suffered a crushing loss in the culture wars are left gasping for words that make sense:

• Breitbart.com contributor John Nolte tweeted that the SCOTUS decision means the “Big Gay Hate Machine is coming for your church next”

Hollywood has played an integral role in this change, and the entertainment industry should stand up and claim due credit for driving our popular culture toward a new definition of normalcy. The movie and television industry went from a shameful past of forcing some of its most talented performers to stay in the closet to celebrating the reality of gay people throughout society on television and on the big screen.

It’s a moment when Hollywood liberals may want to reconsider their view of Obama. Many who championed him as a first-term candidate lost their enthusiasm about halfway through the President’s first term, voicing their disappointment over the his tepid support of a progressive agenda. But this week will give pause to many, the same week when the Confederate flag is on its way down the flagpole in some Southern states.

Just another unexpected thunderbolt in the long journey toward social justice in America.