Henry Gibson, who came to fame on "Rowan & Martin's Laugh-In" and went on to act in several Robert Altman films, has died at age 73.

The character actor had recurring roles on the TV series "Boston Legal" and "King of the Hill," and was a regular on "Love, American Style." 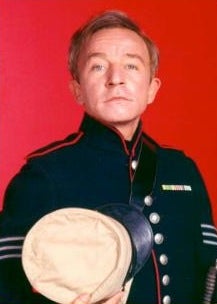 For Altman, Gibson had prominent roles in "Nashville" and "The Long Goodbye." He played an bumbling American Nazi leader in "The Blues Brothers."

On "Laugh-In," Gibson was known for his bad poetry, which he recited throughout his career.

He was nominated for two Golden Globe awards — one for "Nashville" and the other for "Laugh-In" — as well as a Grammy for the songs he wrote for "Nashville."

Gibson died of cancer on Monday at his home in Malibu, his son James Gibson said Wednesday.

Henry Gibson was born in Germantown, Pennsylvania, on Sept. 21, 1935. He started as a child actor, with his break coming in Jerry Lewis' "The Nutty Professor."

Memorial services have not been announced. In lieu of flowers, donations may be made to the Screen Actors Guild Foundation and Friends of the Malibu Public Library.