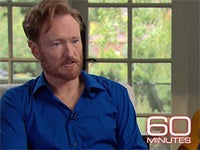 CBS just posted an excerpt of its upcoming “60 Minutes” interview with Conan O’Brien, the first televised interview the former “Tonight Show” host has done since his unceremonious sacking by NBC earlier this year.

Here’s some of what a bearded O’Brien told Steve Kroft:

"He went and took that show back and I think in a similar situation, if roles had been reversed, I know … I know me, I wouldn’t have done that."

What would he have done? “Done something else, go someplace else,” O’Brien said. “I mean, that’s just me. … If I had surrendered The Tonight Show and handed it over to somebody publicly and wished them well, and then … six months later. But that’s me, you know. Everyone’s got their own, you know, way of doing things."

And, on his decision not to stay at NBC: "I think this relationship is going to be toxic and maybe we just need to go our separate ways … That’s really how it felt to me … and I started to feel that I’m not sure these people even really want me here. … I can’t do it."

As part of his severance agreement with NBC, O’Brien – currently on tour in a variety stage show — is not allowed to appear on television until May 1.

He’s also not supposed to bash Leno or NBC, per Peacock-imposed exit restrictions.

"He flirts with the restrictions" in the interview, Kroft told Media Decoder.

CBS will broadcast the interview on Sunday, May 2.