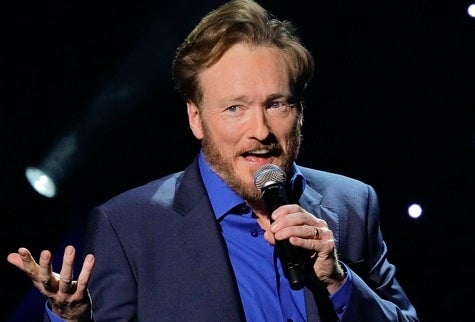 Conan O’Brien is breaking his silence — and not a minute too soon.

The former "Tonight Show" host will speak to CBS’ "60 Minutes" this Sunday. Steve Kroft, who appeared on O’Brien’s show when it was still "Late Night with Conan O’Brien" back in 2001, is doing the interview.

The timing isn’t coincidental: O’Brien’s exit deal with NBC says he can’t do formal interviews until May 1. Sunday is May 2.

O’Brien, who recently signed a deal with TBS to host a four-night-a-week 11 p.m. talk show that would start in November, is currently in the middle of a 32-city live show tour.

(Exclusive: Behind the Scenes at Conan’s Tour Rehearsal)

Reps for O’Brien have been swamped with interview requests since the day NBC announced it was mulling moving his show from 11:35 p.m. to midnight. He’s been bound from speaking until now, and there’s no doubt a backlog of requests to talk to him.

That said, don’t expect O’Brien to start a major media blitz — at least not now.

He can’t disparage NBC — or Jay Leno — at all, and it’s not clear he even wants to spend much time focusing on the past. What’s more, there’s not much sense in O’Brien using mainstream media too extensively right now, particularly since he’s become a Twitter phenom and is effectively communicating with his core audience via his concert tour.

It’s more likely he’ll do only a limited number of interviews right now, with more PR closer to the November debut of his show.

Nonetheless, Kroft told the New York Times that O’Brien "flirts with" those restrictions. And in an absurd twist, NBC’s limitations mean that CBS won’t be able to use O’Brien’s likeness to promote the segment before Saturday.

“I think we’ll just show me talking to him and have to blank his face out,” Kroft told the Times.

Read also: Shocker: Conan Headed Back to TV — on TBS, Not Fox
x
Looks like you're enjoying reading