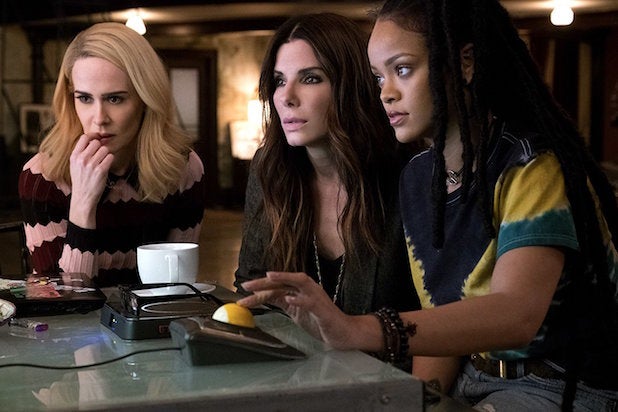 “Ocean’s 8” is a fun heist movie with a stellar cast (Anne Hathaway gets most of the praise), but it doesn’t quite match the original “Ocean’s” trilogy, critics say.

“The beauty of ‘Ocean’s 8’ is how it manages to transcend its status as ‘the female ‘Ocean’s 11,'” delivering a bold, funny and joyous crime caper that gives its predecessor a run for its money,” added Refinery 29’s Anne Cohen.

Currently, the heist movie holds a score of 76 percent on Rotten Tomatoes. Time Out’s Tomris Laffly says that the film starring Sandra Bullock and Cate Blanchett sticks to the formula but never “matches the breezy vigour of the Soderbergh-directed trilogy,” while SlashFilm’s Josh Spiegel says, “‘Ocean’s 8’ isn’t nearly as good as any of Steven Soderbergh’s ‘Ocean’s’ trilogy.”

TheWrap’s film critic Alonso Duralde wrote that the Gary Ross-directed film is “similarly curated with care, it gets the job done without ever being one for the record books.”

“Ocean’s 8” follows Debbie Ocean (Bullock) who is fresh out of prison when she recruits a team of thieves to rob the Met during the famed Met Gala in New York City. Her partners in crime include Blanchett, Mindy Kaling, Anne Hathaway, Rihanna, Awkwafina, Paulson and Bonham Carter.

The film will hit theaters on Friday.

“‘Ocean’s 8’ sticks to the formula, though Ross never quite matches the breezy vigour of the Soderbergh-directed trilogy, but the jokes land and there’s a satisfying twist to bring down the curtain. And, hey, resisting its mischievous spirit is simply impossible. How often is a group of skilled women allowed to be bad? So follow this first-rate ensemble’s lead, slip into something fabulous and join the fun.”

“This caper’s a keeper. On a scale of one to 10, ‘Ocean’s 8’ scores a 9. Both charmingly retro (dig that swingin’ score!) and confidently modern (girls run the world!) it’s a hip heist movie with a few laughs and some lovely fun.”

See Video: Mindy Kaling Not Sure If Rihanna Knows Who She Is - Even After 'Ocean's 8' Team-Up

“Perhaps the film coasts too heavily on the sheer novelty of watching women band together to steal stuff, failing to establish its own unique flavour, but it looks and feels the part without ever overegging it. And if the script could have done with a touch more sass and the direction a little more distinction, the cast is divine and the overall effect is entertainingly empowered.”

“Ocean’s 8’ isn’t nearly as good as any of Steven Soderbergh’s ‘Ocean’s’ trilogy. It echoes many of the earlier series’ charms, but never quite enough that it stands entirely on its own. (This film has, as a last example, a vastly more forced attempt at the ‘Clair de Lune’-style closer from ‘Ocean’s Eleven.’) Though ‘Ocean’s 8’ can’t hope to meet the quality of those other films, Gary Ross has at least made a decent spin-off. It’s good enough to suggest the promise of future installments with a little bit more spunk and willingness to veer somewhat away from the male-driven trilogy.”

“In the early planning stages of ‘Ocean’s 8’s’ epic Met Gala heist, Debbie Ocean (Sandra Bullock) explains her reasoning for an all-woman crew: ‘A him gets noticed. A her gets ignored. And for once, we’d like to be ignored.’ The line, from Gary Ross’ and Olivia Milch’s script, is a simple plot exposition device, but one that’s heavy in meaning. I don’t remember Danny Ocean (George Clooney) ever pulling Rusty (Brad Pitt) aside to justify his decision to gather a group of male friends to rob three casinos. Why would he? What was the height of normalcy for one becomes a central plot point for the other. And yet, the beauty of ‘Ocean’s 8’ is how it manages to transcend its status as ‘the female ‘Ocean’s 11,'” delivering a bold, funny and joyous crime caper that gives its predecessor a run for its money.”

“If I’m being honest, what I’m looking for in an ‘Ocean’s’ movie in 2018 isn’t great writing or eye-popping cinematography or experimental storytelling; I want to see some great actresses having the most fun. ‘Ocean’s 8,’ at its most endearing, is a slick, glamorous romp that makes you yearn for three more hours with its impossibly charismatic crew.”

“‘Ocean’s 8’ is a continuation of the franchise launched in 2001 by Steven Soderbergh’s ‘Ocean’s 11,’ which was itself a remake of the 1960 film of the same name. Thanks in no small part to the charm of George Clooney, Brad Pitt and Matt Damon, as well as the clever heist their characters pull off on a Las Vegas casino, ‘Ocean’s 1’1 was successful enough to earn two sequels: ‘Ocean’s Twelve’ and ‘Ocean’s Thirteen.’ Unfortunately, the heist series saw diminishing returns at the box office, and concluded with ‘Ocean’s Thirteen’ in 2007. However, director Gary Ross revives the franchise more than a decade later for an all-female reboot with ‘Ocean’s 8,’ from a script he co-wrote with Olivia Milch. ‘Ocean’s 8’ offers a fun female-fronted summer movie experience as it returns to the world of ‘Ocean’s 11,’ but falls short of elevating the franchise.

“Plot-wise ‘Ocean’s 8’ cleaves closely to the tenets of Heist Movie Lore but does little to enliven or tweak the formula. It lacks the jazzy swagger of Soderbergh’s trio but delivers a fun, likeable romp built on the charm and charisma of its cast.”

Delia Harrington, Den of Geek:
“How do you make a spinoff to the wildly successful reboot of ‘Ocean’s 11’ without making the whole thing feel completely played out? Get an all-star cast, keep the intrigue, fun, and style from the original, and make everything else uniquely female. From the target and methods employed throughout to the personnel and their reasons for joining the crew, ‘Ocean’s 8’ offers refreshingly feminine perspective to this well-worn franchise that despite any early stumbles scores big.”