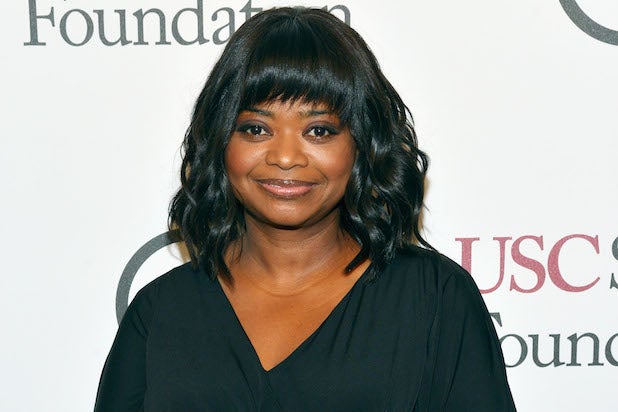 Robert Schwentke is directing from a screenplay by Brian Duffield and Akiva Goldsman, who adapted the bestselling young adult novel by Veronica Roth.

“Insurgent” raises the stakes for Tris (Woodley) as she searches for allies and answers in the dystopian ruins of a futuristic Chicago. Tris and Four (James) are now fugitives on the run, hunted by Jeanine (Winslet), the leader of the power-hungry Erudite elite. Racing against time, they must find out what Tris’s family sacrificed their lives to protect, and why the Erudite leaders will do anything to stop them. Haunted by her past choices but desperate to protect the ones she loves, Tris, with Four at her side, faces one impossible challenge after another as they unlock the truth about the past and ultimately the future of their world.

Spencer will play Johanna, the leader of the Amity faction.

Book sales of the “Divergent” trilogy have surged to nearly 22 million copies worldwide, up from 17 million at the time of “Divergent’s” release on March 21.

“Divergent” has already broken the $250 million mark at the worldwide box office and is Lionsgate’s highest-grossing domestic box office release outside of “The Hunger Games” and “Twilight” franchises.

Lionsgate executives Erik Feig and Gillian Bohrer will oversee the project for the studio.

Spencer, who won an Oscar for “The Help,” recently starred in “Fruitvale Station” and will soon be seen in “Snowpiercer” and the James Brown biopic “Get On Up.” She also stars on the upcoming Fox series “Red Band Society.” She’s represented by WME and Jackoway Tyerman.