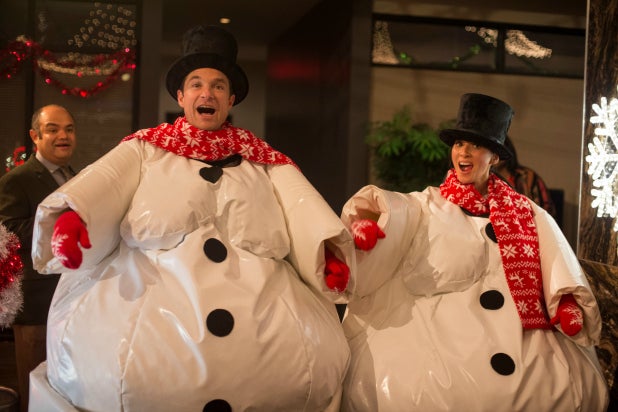 With “Office Christmas Party,” Hollywood continues its annual tradition of embarrassing itself every December by humping our leg dressed as Santa and hoping we laugh. A busy but witless and stale comedy that rehashes every raunchy gag we expect from R-rated comedies, it also wears its hackneyed sentimentality and cookie-cutter underdog story beats as proudly as adhesive nametags.

For a movie supposedly built around the anything-can-happen suspense of work colleagues letting their freak flags fly for one crazy night, there’s nothing surprising or shocking-funny about the shenanigans on display here, unless you find Jason Bateman wryly reacting to bad behavior or Jennifer Aniston appearing in another vulgar comedy alarming.

Part of the problem is the nature of why Christmas parties in the workplace are amusing to begin with: knowing the professionals around you so well in their 9-to-5 life that their loosening up after a drink or two is either a giggly treat or a lawsuit in the offing. What happens, then, when you populate a fictional business with characters you only get to know for 30 minutes before everything gets crazy, and played by comedians (T.J. Miller, Kate McKinnon) you’re already hardwired to view as nutty? If you’re directors Will Speck and Josh Gordon (“Blades of Glory”), and screenwriters Justin Malen and Laura Solon and Dan Mazer, you ratchet up the engineered insanity (copiers, meet body parts, and body parts, meet drugs and prostitutes), stick on a save-the-company plot, throw in the Russian mob and a car chase, and hope nobody notices.

The business in question is the Chicago branch of Zenotek, a family-run tech company in a financial and management crisis as the day of their annual holiday shindig starts. With layoffs imminent thanks to Scrooge-like interim CEO Carol Vanstone (Aniston, her brow in perma-furrow), branch president Clay Vanstone (Miller) — Carol’s boyishly sweet but clueless younger brother — enlists his just-divorced tech head Josh (Bateman) and lead systems engineer Tracey (Olivia Munn) to help him land a big-fish client (Courtney B. Vance) that will stave off the downsizing.

The solution? Invite him to the office wingding that meanie Carol thinks she canceled, but which is now secretly back on, so the gang can show Vance’s character that they’re … party animals worth trusting with an expensive contract? Needless to say, problem-solving logic wasn’t on the agenda of the screenwriters.

And again, neither was doing anything new with jokes about things going wrong. The trajectory of the night’s hookups is predictable, too. Bateman and a regrettably sanded-down Munn are one very obvious pair, obviously handled by the thin narrative. Starchy HR weirdo Mary (McKinnon) and the angry customer service head (Rob Corddry) who hates her will find a grudging respect. A nerdy, bullied IT head (Karan Soni, “Deadpool”) hiring a prostitute (Abbey Lee, “The Neon Demon”) to be his fake girlfriend can only go wrong when she shows up with her gun-toting pimp (Jillian Bell). The only unexpected laugh comes when Vanessa Bayer’s chipmunk-cheery secretary follows through on a flirtation with Randall Park’s shy colleague, only to discover a very particular quirk.

While it boasts efficient pacing and a solid cast, “Office Christmas Party” resembles the conga line at drunken bashes: you assume the participants are having a grand ol’ time, but watching one is tedious. Eventually the movie replaces your laughter with a kind of nostalgia trip for when you found these actors funnier.

Bateman looks tired of having to be the sane wisecracker for the umpteenth time, while Aniston’s villainess is barely allowed a shot at humor. (Cursing at a little girl doesn’t count.) Miller’s dopey mensch is a wan variation on his infinitely more nuanced nutjob boss on “Silicon Valley,” while Corddry’s trademark impishness feels past its sell-by date. Even Bell, repeating the nice-then-scary shtick she made so memorable in “22 Jump Street,” looks to be struggling to find a ticklish groove.

Only McKinnon manages to layer a workplace stereotype (the rules stickler who harbors a wild side) with enough of her secret blend of 11 herbs and spices to suggest the unstable friskiness an out-of-control party can whip up. Give her a fart joke, an ugly Christmas sweater gag, a minivan, or a secret confession moment, and she’ll kill it. She’s a national treasure.

“Office Christmas Party,” on the other hand, is likely to be buried and forgotten once the holiday season ends.