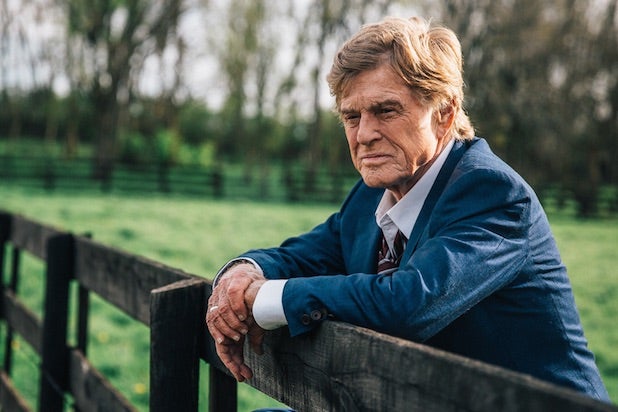 Saying goodbye isn’t easy. If we’re lucky, we are afforded one last chance to share time with them in ways that matter. Although Robert Redford will be alive for years after the lights dim on his film career, he’s given his fans a chance to say goodbye to Robert Redford the actor with David Lowery’s latest film, “The Old Man & the Gun,” which premiered at the Telluride Film Festival last month.

Stephen King once wrote about being a writer, “I was being paid to do what I loved, and there’s no gig on earth better than that; it’s like a license to steal.” In what he has said will be his last film performance, Redford plays real-life bank robber and serial prison escapee Forrest Tucker. This story may not carry the same weight as, say, movies where the characters have to make “one last job” and then they’re free from the traps they’ve made of their lives.

Here, Tucker simply enjoys the rush of being able to get away with something.

The film would not sit quite right if it was only about Tucker’s life of robbing banks, getting caught, going to jail, escaping. It works best as a breezy love letter to the Redford we know on screen, not necessarily the man we know him to be — an environmentalist, founder of the Sundance Film Festival, Oscar-winning director.

No, this film is very much a reflection of the Redford who lived on the big screen — fiery red full head of hair, wide jawline — so good looking in his prime he could make almost any woman weak in the knees. To date, there are few actors that beautiful.

Lowery brings back that old Redford we knew and loved fondly, with old photos of the young Redford and even a clever nod to “The Sting.” In that moment, in that light, “The Old Man & The Gun” is a film every Redford fan must see. We have important people in our lives for such a relatively short time. Even though actors live forever on screen, their past selves preserved in golden amber, sooner or later we have to say goodbye.

Lowery is known for opaque, brooding fare like “A Ghost Story,” in which a mournful Casey Affleck was stuck in a ghostlike state as life cycled around him. It’s a haunting, lonely film about the temporary nature of life and love.

“The Old Man & The Gun” is a departure for Lowery, and a film that almost lives in a different time — a time when no one would need to wonder whether a black man might get away with the same kinds of crimes as he did. (Short answer: not a chance; they’d be shot in the street.) But to celebrate Redford, it is necessary to go back in time, back even to grainy film, leisure suits, Oldsmobiles.

Casey Affleck plays the cop trailing Tucker, but even he can’t bring himself to catch him. There is a part of him that doesn’t want Tucker to stop. It is Affleck’s character who, instead, breaks the fourth wall ever so briefly to pay tribute to an actor he, and so many others, clearly admires.

In that one moment, the film makes sense. It becomes suddenly moving in the way that dreams can wake you up from a deep sleep, and though you don’t really understand what they’re about they touch you deeply all the same.

It isn’t that the film is hard to understand. It flows well, and works as a narrative on its own terms. But the movie’s real worth is in that long relationship between actor and audience, between god and worshipers, between a young man whose beauty seemed like it would last forever and an old man whose life has long since let that part go.

Redford doesn’t cling to who he was but he acknowledges, with this film, this swan song, that so many others do.

The film’s best performance comes from Sissy Spacek as Redford’s love interest. Spacek’s character lives in the real world where you don’t steal things and where you plant roots with a family and in homes you love. True, she is an anchor for him — a savior — but Spacek finds depth in the performance that doesn’t seem to be in the script. It is in her eyes, twinkling with the wisdom of a lifetime on screen and off.

Tom Waits has a brief role as one of Tucker’s partners in crime. Danny Glover plays another, and Elisabeth Moss has a small part as Tucker’s unknown daughter.

“The Old Man & The Gun” isn’t the best film of either Redford’s or Lowery’s career. There are things that work and things that don’t quite work. It is hard to imagine anyone that normal seeming being that addicted to committing crimes “as a gentleman.”

Lowery is clearly more comfortable dwelling in darkness than in the kind of light touch required here. But his admiration for Redford infuses every scene, and it’s clear how Affleck feels, too. How do you even act alongside Robert Redford anyway? He’s an American treasure who has helped shape film history. There aren’t many more around like him. That makes this film, this chance to wave goodbye to someone we have loved so dearly, more than just a movie.

In saying goodbye to Redford, we remember Paul Bratter, the Sundance Kid, Jeremiah Johnson, Bill McKay, Hubble, Johnny Hooker, Jay Gatsby, Waldo Pepper, Bob Woodward, and on and on it goes. If this is, indeed, his last film role, he, like Tucker, chose to go out smiling.

Robert Redford's 15 Most Memorable Movies, From 'Butch Cassidy' to 'All Is Lost'

Robert Redford announced he was retiring from acting -- but still had a brief cameo in 2019's "Avengers: Endgame." TheWrap honors the great actor by looking back at 15 of his most memorable movies as both actor and director.

Redford has played just about every character, from a Western outlaw to a talented American skier.