When we say the premise of M. Night Shyamalan’s new film “Old” gets old fast, we mean it literally, as a family trip to a remote beach becomes a nightmare.

“Old” stars Gael García Bernal and Vicky Krieps as two parents who bring their kids on vacation, only to watch as their children age rapidly to become teenagers in the blink of an eye. In fact, every person stuck on this little patch of sand is getting wrinkles and slowing down, and one even suddenly sprouts a pregnant belly.

It’s Shyamalan’s return to a twisty, mind-boggling thriller after scoring some recent hits with “Split” and “Glass,” as well as his Apple TV+ series “Servant.” The film opens in the heat of summer, hitting theaters on July 23. 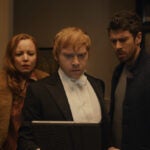 Shyamalan wrote and directed “Old” based on a graphic novel called “Sandcastle” by Pierre Oscar Lévy and Frederik Peeters.

The film is a Blinding Edge Pictures production and is produced by Ashwin Rajan and Marc Bienstock. The film’s executive producer is Steven Schneider.

Check out the first full trailer for “Old” here and above.