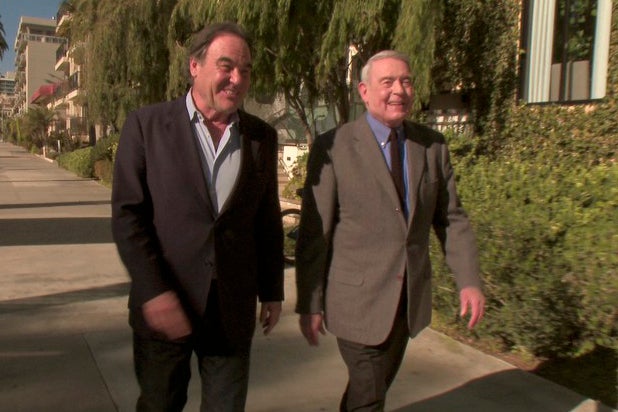 The Academy Award-winning filmmaker behind “Platoon” kicks off new episodes of the legendary newsman’s hour-long interview series on AXS TV. When Rather asked Stone if he would ever make a President Obama film, he replied: “I don’t think he’s that interesting enough, I think that’s more of a Spielberg movie.”

Stone, unprovoked, added, “I fault Spielberg for his view of exceptionalism.”

Also read: Oliver Stone Blasts Obama (Again): ‘He’s a Snake … We Have to Turn on Him’

“Part of me wants to fit in and would love to get Oscars,” Stone continued in a second clip from the piece (posted below).  “But there’s another part of me that says, ‘I’m fucked, I’m on the other side of history.'”

Both Stone and Spielberg have three Oscars.

“What separates ‘The Big Interview’ from other entertainment programs is that it provides a level of truth and insight that is rarely seen on television,” said Mark Cuban, AXS TV founder. “Dan Rather has an incredible legacy in this business, and he knows how to connect — both with his audience and his subjects. He asks the questions that people want answers to, and he always gets the most out of every person he interviews.”

See video: Dan Rather Says CBS News Has ‘A Lot to Answer’ About ’60 Minutes’ Benghazi Flap

Watch the clips below from the Season 2 premiere: