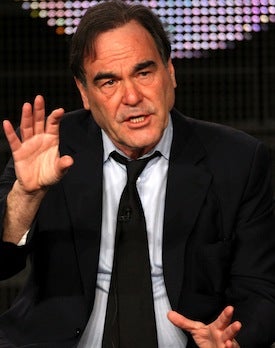 Often an easy controversy target for his feature films, Oliver Stone won’t be dialing anything down in the run-up to his 10-hour television documentary “A Secret History of America,” which will premiere on Showtime later this year.

Speaking on a panel at the Television Critics Tour in Pasadena Saturday, Stone even got started with this little ditty: “Hitler was an easy scapegoat.”

Before anyone add the epithet of Nazi sympathizer to the filmmaker’s long-accumulated list of vilifications, his collaborator on the documentary project, American University history professor Peter Kuznick, stood up quickly, attempting to re-assure TV writers that “We despise Hitler and everything he ever did, but we are going to try to explore Hitler from an historical phenomenon.”

Disturbed by what he thinks is a grossly inadequate history teaching acumen in American schools and in mass media, Stone has sought to craft an alternative 10-hour crash course on the 20th century, full of what he believes are lost and under-reported crucial facts.

For example, in explaining the rise of Hitler, textbooks and History Channel documentaries often don’t note that some American corporations funded the Nazis, Stone said.

“There’s a ethnocentricity to history in this country — an America-first aspect to it. History, by its very nature, tends to be nationalistic,” he said. “What I’m trying to do as an internationalist is to get beyond the American point of view and view history as an international effort.”

The filmmaker, who is currently editing “Wall Street 2,” which will be released in April, seems to understands this stance might make him vulnerable to certain media criticism.

It wasn’t the easiest of falls for the CW, with its remake lineup of “90210” and “Melrose Place” struggling, and its once incendiary “Gossip Girl” losing significant buzz.
But the network still found plenty of momentum to highlight when its time came in Pasadena — with the casts and producers for upcoming family drama “Life Unexpected” and sci-fi/fantasy freshman hourlong “Vampire Diaries” addressing critics.
According to executive producer Kevin Williamson, "Diaries" — which seems a lock for a season 2 — has benefitted greatly from its Atlanta production location.
“I think we’re going to stay in Atlanta — Atlanta has been very good to us,” he said, noting the benefit of the Georgia state production credit. “We have an amazing crew down there that keeps delivering for us day after day. This is a great-looking show with a very polished look.”
For his part, actor Paul Wesley, who plays the dark, mysterious Stefan Salvatore on the series, said the youthful cast benefits from not having media-capital distractions around.
“We only have each other, and that shows up in the chemistry on screen,” he said.
“We’re not exposed,” concurred castmate Ian Somerhalder, who plays Damon Salvatore. “There’s no other media that we have access to.”