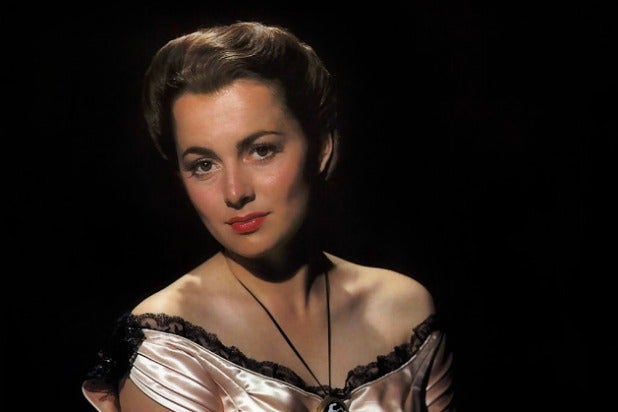 Olivia de Havilland, an Oscar-winning actress best known for her role as the timid but strong Melanie in the 1939 classic “Gone With the Wind,” died Sunday of natural causes. She was 104.

The news of De Havilland’s passing in her Paris home was announced by her publicist, Lisa Goldberg.

Throughout her career, De Havilland had a reputation for standing up for herself. In 1943, she famously went to court when Warner Bros. tried to add time to her completed contract. Her legal victory led to what’s still known as the “De Havilland Law,” a section of the California Labor Code stipulating that an exclusive personal services contract — like an actor’s deal with a studio — cannot extend past seven calendar years.

Born in Tokyo, Japan, in 1913, De Havilland moved to England when she was 6 with her English professor father, acting teacher mother and younger sister, who later came to be known as actress Joan Fontaine. Shortly thereafter, she, her mother and sister moved to California, where the climate better suited the ailing girls.

De Havilland grew up loving the arts, taking ballet and piano lessons at a very young age. She made her amateur theater debut when she was 10 as the title character in a production of “Alice in Wonderland,” and several plays followed. Her stepfather gave her an ultimatum, saying that if she wanted to continue acting, she would not be allowed to live with the family. She chose acting and moved in with a family friend.

A twist of fate led her to her first professional role, playing Hermia in a stage production of “A Midsummer Night’s Dream” at the Hollywood Bowl when she was just 18. So impressed by her work, the director offered the same role in his film adaptation. And that led to a five-year contract with Warner Bros.

Within a year, she was cast in her first costumed historical drama, “Captain Blood” with Errol Flynn, who would become her leading man in eight films, including “The Adventures of Robin Hood,” “The Private Lives of Elizabeth and Essex,” “They Died With Their Boots On” and “The Charge of the Light Brigade.”

In 1939, de Havilland convinced the wife of Warner Bros.’ head Jack Warner, to let her out of her contract so she could play Melanie Hamilton in “Gone With the Wind,” which producer David O. Selznick was preparing to shoot. Her performance earned her an Academy Award nomination (the first of five) for Best Supporting Actress. (It was her castmate Hattie McDaniel who made history that year to become the first African American to win an Oscar.)

Returning to her contract at Warners, de Havilland was discontent with the roles she was being given and refused to do them, resulting in her suspension on more than on occasion. Acting on the advice of a lawyer, she sued Warner Bros., seeking a declaratory judgment that she was no longer bound by her contract. The Superior Court ruled in her favor. Her fight for better roles helped free countless stars from the studio system.

De Havilland’s career would eventually include five Academy Award nominations and two Oscars, one for “To Each His Own” in 1946 and the other for “The Heiress” in 1949. (Her younger sister, Joan de Beauvoir de Havilland, would become the actress Joan Fontaine. Though their relationship was famously chilly, they are the only siblings ever to win lead acting Oscars.)

She retired from acting in the late 1980s, but remained in the public eye. In 2017, she sued FX and Ryan Murphy over her portrayal in the acclaimed series “Feud,” in which she was played by Catherine Zeta-Jones. The lawsuit, which was later dismissed (after the Supreme Court declined to revive her case in 2019), continued a lifetime of standing up for herself.