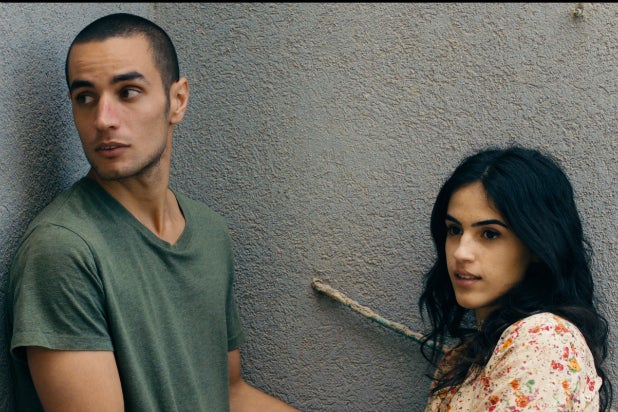 Acts of terror aren’t always cataclysmic. Sometimes they work slowly and quietly, seeping under the skin until the sufferer doesn’t feel like himself anymore. Terror plagues the titular character of the excellent Palestinian drama “Omar,” who can no longer walk down the street or sit in his home without expecting a burst of sudden violence or spontaneous cruelty from the Israeli police.

That’s partly because Omar (Adam Bakri) and his two friends Tarek (Eyad Hourani) and Amjad (Samer Bisharat) are terrorists, too. Hany Abu-Assad‘s Oscar-nominated film is an insightful study in contrasts between the defiant, ragtag terror the trio strive to commit and the chronic, institutional terror they’re subjected to every day under Occupation. (Abu-Assad also directed 2006’s “Paradise Now,” the only other film from Palestine to receive an Academy Award nomination.)

Unlike the committed suicide bombers in “Paradise Now,” love-struck baker Omar is more concerned with finding the right time to ask the family of his secret girlfriend Nadja (Leem Lubany) for her hand in marriage. Nadja is Tarek’s younger sister, and the two siblings share a fervor for punishing the ideologically impure. Rounding out the group is Amjad, whose goofy impression of Brando-as-Corleone proves he’s the Fredo of their circle.

The irreconcilable responsibilities of freedom fighter and devoted husband cause Omar grief even before he becomes an accessory to Amjad’s murder of an Israeli soldier. Amjad grins lasciviously after his bullet hits its target – one of Abu-Assad’s most pointed refusals to condone or glamorize terrorism. Soon after, Omar is picked up by Israeli police, tortured, and threatened with a 90-year sentence. “Is there anything that can be done?” he asks his lawyer. “As long as the occupation continues, nothing,” she answers.

Omar’s released from prison on the condition that he serve as a double-agent and deliver Tarek, the police’s (wrong) suspect for the soldier’s slaying, to his case officer Agent Rami (Waleed F. Zuaiter). By the time he reunites with his old pals, word has spread that there’s a traitor in the cell. Though he never intended to actually cooperate with Rami, Omar has been sent home with a time bomb that explodes trust and solidarity wherever he goes. Soon, even Nadja wonders whether he’s a spy.

The interpersonal destruction that follows in the wake of police-infused suspicion gives the film its weary weight. Zuaiter’s gentle-eyed officer is appropriately terrifying, less for the brutal beatings he initially gives Omar than the Svengali-like way he holds the threat of unsaid secrets over the young man. When he boasts that he knows everything about everyone, including things about Nadja Omar would never want to know, it’s difficult to doubt him and his invisible army of informants.

But the Palestinian characters aren’t just victims: they’re human beings. The film smartly makes clear that Omar’s relationships with Nadja and Amjad would have fallen apart in any country; under the Israeli occupation, however, the personal is quickly assumed to be political and vice versa, rapidly raising the stakes of every disagreement and quarrel to tragic proportions.

Omar can’t ever outsmart Rami, and he knows it. And though fleeing from the police through the dusty streets of the West Bank has made him a nimble parkour-ist (illustrated in chase scenes that invigorate but don’t quite fit), Omar knows he’s trapped, with no sanctuary.

Abu-Assad’s cleverly plotted script, reportedly written in just four days, deserves credits for its admirable efforts to humanize every segment of Israeli-Palestinian society. But the labor of those efforts shows; certain scenes seem to exist solely to ensure everybody gets a fair shake.

Then there’s the disappointing ending – a nihilistic cap to an otherwise profoundly humanistic film. Abu-Assad’s instincts toward action lead him astray once more toward a tacky resolution that feels borrowed from a far less interesting and subtle movie. Like a catastrophic stroke, it’s a strangely numbing event that concludes a previously sensitive, complex life.