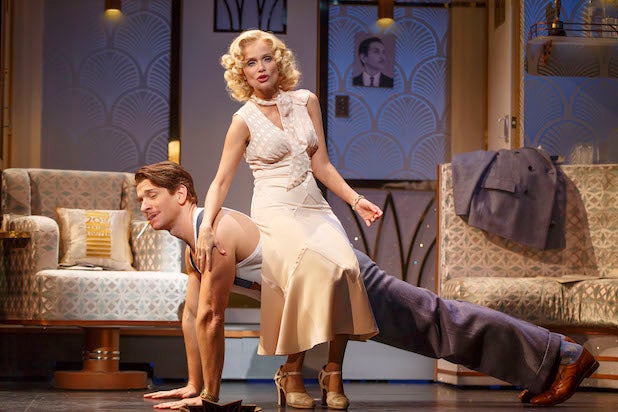 Andy Karl and Kristen Chenoweth in the Roundabout Theatre Company's "On the Twentieth Century." (Joan Marcus)

“On the Twentieth Century” isn’t a great musical, but it does offer great opportunities for actors to prove why they’re stars – or not stars.

The 1976 Broadway musical by Cy Coleman, Betty Comden, and Adolph Green needs stars to reach full locomotion speed. And the current Broadway revival, which opened Sunday at the American Airlines Theatre, has at least one in tip-top form, Kristin Chenoweth.

In her last Broadway outing, a 2010 revival of “Promises, “Promises” in which she was miscast as a lowly elevator operator, Chenoweth offered up a pipsqueak Marlene Dietrich. In “On the Twentieth Century,” her high cheek bones and deep-set eyes are still in evidence, but here she’s able to use her pint-size build, high-pitched voice, and opera training to send up that old school glamour. And the marvel is that she never loses her innate femininity, even when performing some very outlandish physical comedy – like turning her Lily Garland character into a human barbell so lover boy Bruce Granit (Andy Karl being absurdly macho) can do his bicep curls as the 20th Century carries the two of them from Chicago to New York City in 16 hours.

Also Read: Kristin Chenoweth Officially Returning to Broadway in ‘On the Twentieth Century’

Also on this train, of course, is Lily’s Svengali mentor, the impresario Oscar Jaffee (Peter Gallagher), who after four straight flops needs his Pygmalion to headline his next venture in the theater, an extravaganza based on the life of Mary Magdalene. Jaffee is an almost impossible role to fill, not because the character is bigger than an Easter ham, but because John Barrymore offered the definitive owl-eyed, hair-clenching Max Jaffee in the 1934 film version, “Twentieth Century.” That portrayal ranks as one of the great comic screen performances.

Gallagher is good. He’s certainly better than Alec Baldwin in a revival of the Ben Hecht and James MacArthur play a few seasons back. But he’s not Barrymore, who remains indelible. Unfortunately, while Comden and Green reinvented most of the Hecht and MacArthur characters for their musical adaptation, they left Max pretty much alone, except for giving him a few songs.

Chenoweth, on the other hand, is much more naked in her ego-driven ambitions than Carole Lombard in the film or even Madeline Kahn in the original Broadway production of this musical, in which Kevin Kline gave the first of his many Errol Flynn impersonations (and Kahn got fired for missing too many performances). As Bruce Granit, Karl is far less gracefully antic in taking a pratfall than Kline, but he puts those aforementioned biceps to very comic good use. Mary Louise Wilson is a preternaturally spry religious nut job. And the four porters (Rick Faugno, Richard Riaz Yoder, Phillip Attmore, Drew King) impersonate a train so well you can almost get high on their smoke.

Director Scott Ellis follows “You Can’t Take It With You” with this fine-tuned revival. Ellis suddenly owns American screwball comedy. In fact, most of the fun in “On the Twentieth Century” comes from silent bits of business between the actors. Truth be told, Comden and Green’s book inspires more smiles than belly laughs, and Coleman’s music borrows from everybody (Bernstein, Gilbert & Sullivan, Lehar, Bellini) but himself at his best. “On the Twentieth Century” needs stars, and for the most part this production delivers them express.