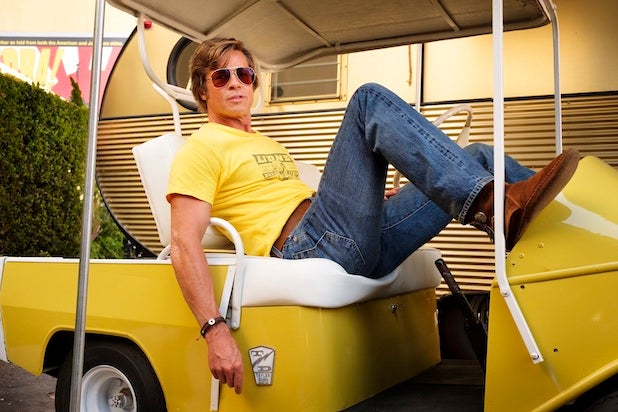 Quentin Tarantino’s “Once Upon a Time… in Hollywood” debuted at the Cannes Film Festival on Tuesday, and early reviews are calling the film “mesmerizing,” “beautiful” and “the film QT was meant to make.”

However, Screen Daily’s Tim Grierson writes: “ONCE UPON A TIME IN HOLLYWOOD: Like a lot of recent Tarantino, this is baggy, self-indulgent, fascinatingly its own thing and ambitiously conceived. Of course it’s accomplished, sometimes dazzlingly so, but it ends up being as hit-or-miss as his last few.”

“Once Upon a Time… in Hollywood” is set in Hollywood in 1969 and follows a fading TV actor (Leonardo DiCaprio) who teams up with his stunt double (Brad Pitt) to reclaim fame during Hollywood’s final years of its golden age. But always lurking in the shadows of what is, in a way, an otherwise sunny and colorful Hollywood fairy tale, is Charles Manson and the Manson Family murders that took place in this same time period. Margot Robbie is playing the murdered film star Sharon Tate.

See Video: 'Once Upon a Time in Hollywood': Leonardo DiCaprio Torches Nazis With a Flamethrower in New Trailer

“#OnceUponATimeInHollywood is a beautiful, brash rumination on the grime and beauty of Hollywood. It is a dirty, sensually realized feat, with many, many shots of dirty, sensualized feet,” critic Jason Gorber wrote.

“Once Upon a Time …. in Hollywood” is Tarantino’s ninth film, and it premieres at Cannes Tuesday before opening in theaters from Sony on July 26. Tarantino has asked that people who see the movie at Cannes withhold any spoilers, but for now, we have this trailer to get excited over.

According to people who attended the premiere, Tarantino received a long standing ovation before the film even started.

See the reactions below.

ONCE UPON A TIME IN HOLLYWOOD is wonderful. it’s like tarantino is just dreamily reminiscing for our benefit. feels innocent somehow—lovely, pure, hilarious. witnessing robbie, dicaprio, & pitt pristinely embody 60s LA is enough to make it great. and????????that????????payoff???????? #Cannes2019

#OnceUponATimeInHollywood is a beautiful, brash rumination on the grime and beauty of Hollywood. It is a dirty, sensually realized feat, with many, many shots of dirty, sensualized feet.#QuentinTarantino #Cannes2019

#OnceUponATimeInHollywood is a mesmerizing mix of Jackie Brown- and Inglourious Basterds-Tarantino. QT is at his least flashiest and most emotional, yet at the same time having a ball toying around with Hollywood cinema, locations and history. #vertigocannes #cannes2019

ONCE UPON A TIME IN HOLLYWOOD: Tarantino wasn't joking when he said this was the closest to PULP FICTION that he has come. He juggles a mosaic of characters and story-lines in this one, eventually stringing them together for a relentlessly playful and touching finale. #Cannes2019

As expected, Once Upon a Time in Hollywood is Tarantino referencing other films and TV and old Hollywood and good times in the 60s. Digging into his past and showing us, through perfectly crafted cinema, his feelings about moviemaking and artists and the Manson murders and more.

Once Upon A Time… In Hollywood is so gloriously, wickedly indulgent, compelling and hilarious. The film QT was born to make. The world is a more colourful place in Quentin Tarantino’s twilight zone. Round two, please. #Cannes2019

once upon a time in hollywood: the maestro once again weaves a rich tapestry of an america long past or perhaps…not. a vicious takedown of celebrity that revels in the flashing lights. a love letter & a screed, a whisper yet also a pray. the scared & the propane #Cannes2019

I wouldn’t change a single second of Once Upon A Time … In Hollywood. It did not disappoint. #Cannes2019

To be completely honest I'm not yet sure what to make of Once Upon a Time in Hollywood. Need to let this one marinate, don't have an instant reaction. Most of the film is pretty good, I'm having fun watching them play around in late 60s Hollywood. Then the finale is HOLY FUCK.