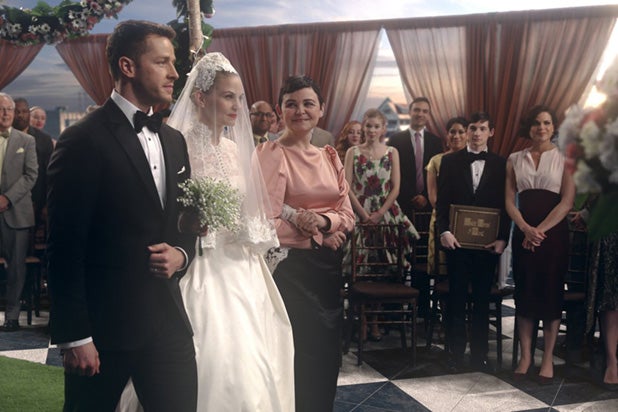 “Once Upon a Time” is going to grant fans’ greatest wish when it closes the book on its final chapter: the return of series regulars Jennifer Morrison (Emma Swan), Ginnifer Goodwin (Snow White/Mary Margaret), Josh Dallas (Prince Charming/David) and Emilie de Ravin (Belle/Lacey).

The ABC fairytale drama announced Wednesday via Twitter that these favorites — who departed the series at the end of the sixth season — would be making an appearance in the series finale in May.

This news follows the previously announced returns of JoAnna Garcia Swisher as Ariel, Tony Amendola as Marco/Gepetto, Lee Arenberg as Leroy/Grumpy, Robbie Kay as Peter Pan, Sean Maguire as Robin Hood, Victoria Smurfit as Cruella de Vil and Keegan Tracy as Mother Superior, who are all set to appear in one or both of the ABC drama’s last two episodes.

Also Read: 'Once Upon a Time': Robin Hood, Peter Pan Among Characters to Return for Series Finale

ABC announced last month that the recently-rebooted series will end with its current seventh season, after losing the majority of its series regulars.

“Seven years ago, we set out to create a show about hope, where even in the darkest of times, a happy ending would always be possible,” creators and executive producers Edward Kitsis and Adam Horowitz said in a statement at the time of the announcement. “But we never imagined the happy ending that was actually in store for all of us — years and years of adventure, romance, magic and hope.”

See the announcement below.

Also Read: 'Once Upon a Time' to Wrap After Season 7

The “Once Upon a Time” series finale will air on May 18 on ABC.

We wouldn’t want to leave this tale as old as time without our lovely Belle! @emiliederavin will join us for #OnceUponATime’s final chapter. pic.twitter.com/v6AWYT9YfV

You didn’t think we’d say goodbye without the Charmings, did you? Ginnifer Goodwin, Josh Dallas, and @jenmorrisonlive round out the cast of our epic #OnceUponATime finale. pic.twitter.com/ZhvSnpQiDJ