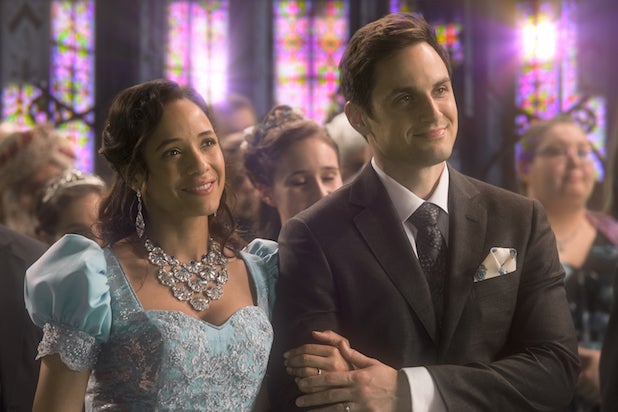 (Spoiler alert: Please do not read ahead unless you’ve seen the series finale of “Once Upon a Time.”)

Sadly, Robert Carlyle’s Rumpelstiltskin did not make it to end of “Once Upon a Time.” But that doesn’t mean he didn’t get to live happily ever after, just like all the other fairytale characters we have come to know and love over the last seven seasons.

The final episode of Adam Horowitz and Eddy Kitsis’ fantasy drama on ABC, titled “Leaving Storybrooke,” aired Friday, and with it came the bittersweet reveal that in order for everyone else to be saved, Rumple would have to sacrifice himself in a battle against himself (it makes sense if you watched it). And he knew that meant giving up any chance he had of reuniting with his one true love Belle (Emilie de Ravin).

But he did it anyway, and was rewarded with seeing Belle again in the afterlife.

Also Read: 'Once Upon a Time' Creators Talk Series Finale - and Why They Don't Regret the Season 7 Reboot

Horowitz and Kitsis told TheWrap why they had to go back to Rumple as their final Big Bad after six seasons of new villains and why his death was what they needed to end this thing right.

“Always, always,” Horowitz said of the plan to end with the evil OG Rumple as our heroes’ final obstacle. “For us, there was no one, nobody [else] — and selfishly, as writers, we just wanted to see Robert Carlyle do it one more time. It was magical.”

“We felt like if in the finale, suddenly Mr. Toad appeared and he was the villain the audience would not be as interested or as engaged as really bringing it back home,” Horowitz added. “And that’s what it was about, which is really we wanted to see ‘full Rumple’ again.” (Oh and we did — glittery, golden makeup, creepy giggling and all.)

Kitsis adds it wouldn’t have been right to do it any other way: “It’s like going to see a band, and then they play their new stuff at the end. You wanted to hear the hits!”

Also Read: 'Once Upon a Time': Roni and Lucy Set Out to Save Henry With 'Operation Bromance' (Exclusive Video)

And that final villain being Rumple meant the final hero also had to be Rumple. (Again, this all makes sense inside the show. Watch it.) His death is what set of the chain reaction that allowed for Regina (Lana Parrilla), Captain Hook (Colin O’Donoghue), Emma (Jennifer Morrison), Snow White (Ginnifer Goodwin), Prince Charming (Josh Dallas) and Henry (Jared S. Gilmore) — along with Season 7’s new characters — to continue their stories.

“We love the idea that the episode and the ending symbolize what the show as about, which was the journey, not the destination,” Kitsis said. “Rumple’s death was what a happy ending looks like. An ending for everyone else is that adventure continues. And also we don’t get to see it every week, but it now lives in the community of Oncers. The fan fiction, and people’s minds, and people’s imaginations. And that’s what a fairytale is, right? It’s something you hear by the fire and then you bring it to your village and someone brings it to their village. So now the story is for the Oncers and they can go do what they want with it.”

But getting that final story on the page was not easy, with Horowitz and Kitsis going over and over the specifics of the ending multiple times before they chose the final product you saw on the small screen tonight.

“I think that for us it’s always hard. Finales are the hardest,” Kitsis said. “And to us ‘Once’ always took a lot of time in its finales and its premieres. So we start thinking about that really really early. So for us we wanted it to be ‘effortless’ — and every time you try to do that it’s super hard. We probably went over that act six of the finale like 200 times before we got the one you saw.”

Horowitz said that, because they were able to get so many of the cast members who departed the series at the end of the sixth season back for the finale, they made “a conscious effort over the two hours to wrap up storylines from Season 7 and then integrate, in a large way, a lot of the legacy characters both who were on Season 7 and who returned.”

“We hoped to take them on one last classic ‘Once Upon a Time’ adventure,” he said.