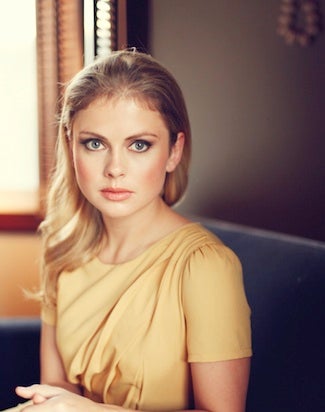 On the heels of playing the iconic Tinker Bell on ABC’s “Once Upon a Time,” Rose McIver has landed two other buzzworthy lead roles.

The New Zealand native plays Cathy in Lifetime’s “Petals on the Wind,” the sequel to  “Flowers in the Attic.” And, currently, she’s shooting the lead in “Veronica Mars” creator Rob Thomas‘ CW pilot, “iZombie.”

“I’ve been very lucky this year. It’s been great,” she told TheWrap of her trio of meaty roles. “It definitely keep things lively.”

Previously, she appeared as Beau Bridges and Allison Janney‘s characters’ precocious daughter, Vivian, on Showtime’s “Masters of Sex.” And younger viewers may remember her as the Yellow Ranger on the 17th and final season of Disney-ABC’s children’s franchise, “Power Rangers.”

TheWrap: What can you tell us about Sunday’s episode in which “Once Upon a Time” ventures to Oz?
Rose McIver: It’s an exciting episode. There’s a lot that goes down. There are some somber moments. I know that there are some startling things from the showdown. I’m excited for fans to see it.

It’s Regina versus Wicked Witch on the episode. What should fans expect from the showdown?
Rebecca Mader has done a brilliant job of bringing the Wicked Witch to life. And it’s really wonderful to see her versus Regina. They’re both such strong, empowered characters. There’s a fantastically dynamic scene between them and things begin to go down.

Also read: ‘Once Upon a Time’s’ Rose McIver to Star on Lifetime’s ‘Flowers in the Attic’ Sequel

Tinker Bell is such an iconic character. How did you decide how you’d portray her?
There are pros and cons. There’s so much reference material that I can look at. I was able to read about [“Peter Pan” author] J.M. Barrie’s original character and see the different incarnations of her over the years. So, there’s a lot to look at and research and there’s also such a wonderful fan base already for the character. She’s beloved. So, there’s the pressure of meeting everyone’s expectations.

For me, once I’ve done the research and thought out what elements of those earlier versions I want to bring to her, I have to then set those all aside. Otherwise, the whole performance becomes very self-conscious. ‘Once Upon a Time’ has always been about making these characters real and making them people we can relate to, so that was my main goal. I’m just so lucky that the fan base has been so supportive. I’m very grateful.

Your casting for Cathy in Lifetime’s “Petals on the Wind” seemed to have come together very quickly.
Yes. I found out about it probably a couple weeks before we started shooting. There’s a lot of ballet preparation for the character, so we started in the deep end. But, after working with Karen Moncrieff, who’s a fabulous director, I was able to get everything I needed to done before I started shooting and I was comfortable and confident when we started rolling.

Also read: ABC Finale Dates: Extended Season-Enders for ‘Once Upon a Time,’ ‘The Middle’

Were you a fan of the books?
I actually haven’t read them. I may be the only person that hasn’t read them. As soon as I mentioned to people that I was doing that project, a lot of fans came out of the woodwork.

“Petals on the Wind” takes place 10 years after “Flowers in the Attic.” What can you tell us about your version of Cathy?
I’m really grateful that Kiernan Shipka did such a fantastic job bringing her to life in the first film. It definitely made it easier for me to step into a character that she had already performed in a three-dimensional version of a character from a novel. I guess my version has been through more than the original character, but she still has that very dense history and a complex relationship with her family. So, I was able to draw on those and combine that with a woman who’s trying to make her own way in the world apart from her background.

The movie’s producer described it as a revenge story. What was it like to play a character with such deep seeded anger?
You have to certainly empathize with where a character has been and where she’s going. I can understand that with what she’s been through, she seeks this deep seeded vengeance. It’s very understandable that these people have wronged her and what she wants to do, but it’s the perfect example of revenge really hurts you just as much as it hurts the other people. So, I can’t help but feel so sad and protective of this character as she makes these decisions, which aren’t necessarily beneficial to her future.

What can you tell us about your role on Rob Thomas’ “iZombie”?
I’m absolutely thrilled. I’m so excited to be working on it. At the moment, they’ve given us pretty strict instructions until we know whether it’s been picked up, so we’re not really allowed to talk about it. But, I’m very, very excited and if it goes to series, I’m certainly looking forward to filling in everyone on the project, because it’s very special, one that I care a lot about.

Kristen Bell has said that for some reason, Rob Thomas really gets a girl’s mind.
I agree. I’ve been aware of him for a while and I had heard great things about him – both professionally and personally.