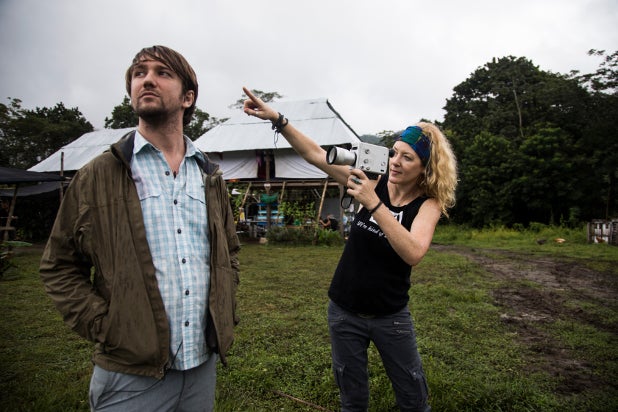 Ondi Timoner arrived at Kalu Yala — a town in the middle of the Panamanian jungle — for a short consulting gig. She wasn’t expecting to jump into a multi-year documentary project. She actually didn’t want to film anything, having decided she was going to be leaving documentaries to make feature films. But there was something about the tiny town that compelled her to not just film a documentary, rather a series called “Jungletown.”

It wasn’t just that it was a unique town. It was an evolving one. It was new.

“You’re looking at a town in its nascent stages,” she said during a recent interview with TheWrap. “There are 1.5 million towns in the world… and this is the first time you’re seeing one documented from the ground up.”

“Jungletown” is a 10-episode series premiering on Viceland that shows a relatively short span in the life of Kalu Yala, the aforementioned town. Kalu Yala is one part budding sustainable town, one part education program, and another part business. Timoner’s documentary series begins with the arrival of 80 interns who paid to spend a 10-week semester there, where they’ll learn to live off the land and how to build and repair aspects of the town. According to the town’s website, a semester can cost up to $7,000.

Also Read: 'Vice World of Sports' Host on How His Show Isn't Really About Sports (Video)

Kalu Yala is one of a kind. It’s not native to the area, but was instead built by Jimmy Stice — an entrepreneur from Atlanta, Georgia who wanted to create a sustainable town from scratch. In 2008, Stice bought 500 acres of land to build the town, but the looming financial crisis ensured that his plans were trashed. In the coming years, he revised his plans. People would come to the town if they could have some part in building it.

Timoner met Stice at the annual Hatch conference — which is a summit for creators both entrepreneurial and artistic to share ideas — where they were both avoiding talks.  That’s when he told her about Kalu Yala. Eventually, Stice invited her down to Panama to discuss how best to tell this story in a video format. Timoner decided to stick around.

“I think that the reason I’m drawn to it is because it’s the first time sustainability and issues related to climate are baked into a story that is suspense driven and makes it look possible,” Timoner said.

The majority of the players are millennials — those who participate in running Kalu Yala and those who are interning. In the first episode, Timoner’s team interviews some of the prospective students and asks them why they decided to join the program. Most had a similar story: They felt stuck and hopeless in the wake of pending climate change disasters, or felt too attached to technology. Their reasons were mostly romantic, hoping that by living in Kalu Yala, they can learn about issues concerning sustainability.

This was something that touched Timoner, who came away from the first season of the project learning more about this upcoming generation of adults.

“What I hope people learn is what I learned from it, which is that there’s a real generation of young people — millennials — who are facing climate disaster and aren’t content with just sitting there,” she said.

But a lot of what viewers will see in “Jungletown” is a breakdown of those romantic ideals. The interns realize that things aren’t as they were advertised. They don’t grow all of their own food, for instance, and it’s unclear exactly where all the money goes. Stice himself doesn’t live in the town but instead travels around getting people to invest money in it. He plays video games — such as “Civilization” and “The Sims” — and buys food from grocery stores. He drives a pickup truck in and out of the town while most have to hike the three miles from the next major area.

Timoner exposes these contrasting ideals, but doesn’t linger on them too long. She acknowledged to TheWrap that she wants to believe in Stice’s mission. She said that most of what we see that can be considered hypocritical is unavoidable, since the town lacks some basic infrastructure.

“There are so many layers and I love that,” Timoner said. “I’m always drawn to stories where there’s a lot of gray area and we get to grapple with how things are versus how we think they should be.”

Watching “Jungletown” is all about noticing this gray area. The show seems to live exclusively in it, swinging between expressing applause for the town’s romantic idealism and criticizing it. The season explicitly touches upon a number of issues that many would chide it for, such as the colonialist nature of the project. Most of the people interviewed come from middle-class families or areas, for instance.

“[They’re] upset that the vision isn’t quite the reality,” Timoner says of the interns. “There’s a gap between the ideal and where we are now and that doesn’t sit well with the interns at times.”

It’s ultimately up to the viewer to decide whether or not Stice is onto something with Kalu Yala, or whether the idea of charging students thousands of dollars to help build the place lives in a questionable, unethical area.

This is the story of people who want to believe in something and in deciding to build a town from scratch, started a conversation. Timoner says she believes in Kalu Yala and presents all the facts so that viewers can decide for themselves.

And Timoner was clear: She wouldn’t have done this at all if she didn’t think it was a story worth telling.

“Jungletown” premieres on March 28 at 10 p.m. on Viceland. It’ll get replayed immediately on A&E  at 11 p.m. A two-episode catch-up will air on Lifetime the following Friday.