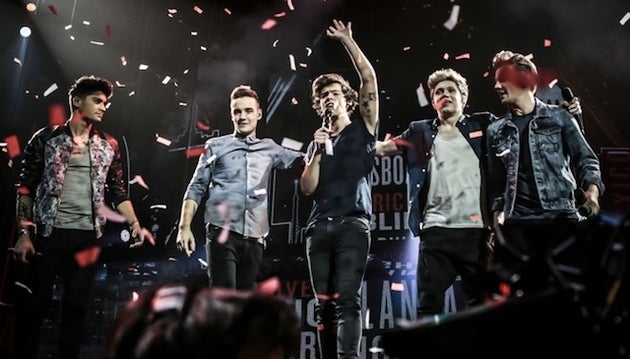 "One Direction: This Is Us" kicked off the Labor Day weekend box office on a high note, debuting to a strong $2.7 million opening on Thursday.

The concert film will roll out in roughly 2,500 theaters nationwide over the holiday and is on track to be the top grossing film of the weekend. Analysts predict the documentary about the hunky British five-some will draw north of $20 million at the box office while inciting mass hysteria among pre-teen girls.

Sony, which is distributing the film, may be joining in the shrieks of ecstasy. If estimates hold, One Direction will prove to be a bigger hit with moviegoers than Katy Perry, whose documentary "Part of Me" opened with a lackluster  $7 million last year, although they will not be able to match Justin Bieber. The Biebster's "Never Say Never" kicked off with a $29.5 million opening in 2011.

The movie is produced by "X-Factor"s' Simon Cowell, who first discovered the boys and made them superstars. Morgan Spurlock ("Super Size Me”) directs and produces the movie, adding some indie street cred to the pop proceedings.

In a slow weekend, One Direction will face off against the third week of "Lee Daniels' The Butler" and a couple of box office also-runs in the espionage thriller "Closed Circuit" and "Getaway" starring teen idol Selena Gomez. Neither new film is expected to make more than $10 million.