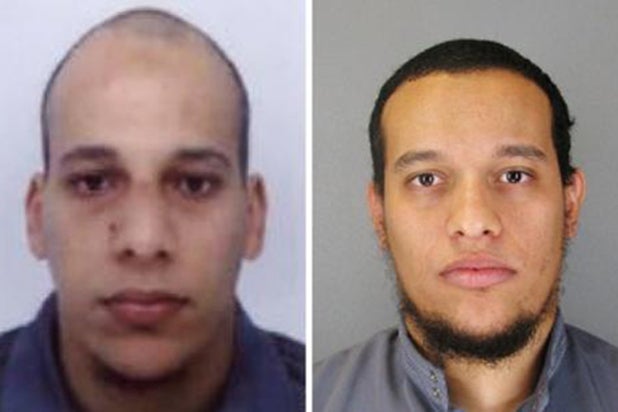 After an exhaustive search, one man believed to be behind the mass shooting at the Paris office of newspaper Charlie Hebdo surrendered to police, according to multiple media reports Wednesday night.

Two other suspects are still being sought, the Associated Press tweeted at 7:38 p.m. PT.

Paris-based network France 24 also reported and tweeted that one of the suspected gunmen had surrendered.

The men — brothers Said Kouachi and Cherif Kouachi, and Hamyd Mourad — are believed to be part of a large Yemeni terrorist network, according to multiple media reports. Kouachi was said to have been previously imprisoned in 2008, serving 18 months on terrorism charges for assisting funnel fighters to Iraq’s insurgency.

Authorities believed the killers were part of a well-trained Islamic extremist network due to their masks and militaristic precision in carrying out the attack.

The terror attack killed at least 12 people at the offices of the French satirical newspaper. Another 11 people were injured, four of them seriously. Among the dead were the paper’s publisher and editor Stéphane Charbonnier, cartoonists Georges Wolinski and Bernard Verlag, and two police officers.