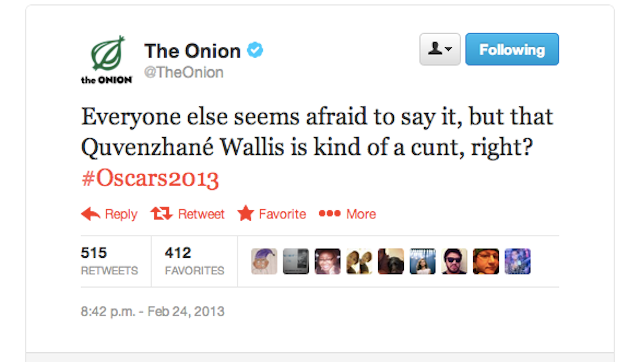 The satire site The Onion apologized for an Oscar night tweet that jokingly called Quvenzhané Wallis, the 9-year-old star of "Beasts of the Southern Wild," a crude word for female genitalia.

The joke outraged many readers and shocked executives at Fox Searchlight, the studio behind her Oscar-nominated film. The furor was immediate enough that The Onion, which thrives on borderline jokes, took the unusual step of deleting the tweet within about an hour.

"Everyone else seems afraid to say it, but that Quvenzhane Wallis is kind of a c—, right?" the Onion tweeted.

The joke, of course, was the idea that anyone would say anything offensive about the sweet-faced Wallis. But the site was immediately accused of racism and sexism, as well as trying to hide behind irony.

"It was crude and offensive — not to mention inconsistent with the Onion's commitment to parody and satire, however biting," Steve Hannah, the Onion's CEO, said in a statement. "No person should be subjected to such a senseless, humorless comment masquerading as satire."

He added that the individuals responsible would face disciplinary action and the publication would tighten its procedures for Twitter.

The disgust over the tweet was immediate. One distressed Fox Searchlight executive showed the tweet to a reporter at the post-Oscars Governor's Ball, wondering who would write something so offensive. But Fox Searchlight declined to comment on the record.

Wallis, also attending the party, appeared unaware of the tweet as she twirled solo on the dance floor to Frank Sinatra tunes, sung by Michael Feinstein.

Wendell Pierce, an actor who starred in "The Wire" and "Treme," urged the Onion to name the writer behind the joke.

"Identify the writer," he wrote in a tweet. "Let him defend that abhorrent verbal attack of a child. You call it humor, I call it horrendous."

Here is the full apology from the Onion:

On behalf of The Onion, I offer my personal apology to Quvenzhané Wallis and the Academy of Motion Picture Arts and Sciences for the tweet that was circulated last night during the Oscars. It was crude and offensive—not to mention inconsistent with The Onion’s commitment to parody and satire, however biting.

No person should be subjected to such a senseless, humorless comment masquerading as satire.

The tweet was taken down within an hour of publication. We have instituted new and tighter Twitter procedures to ensure that this kind of mistake does not occur again.

In addition, we are taking immediate steps to discipline those individuals responsible.

Miss Wallis, you are young and talented and deserve better. All of us at The Onion are deeply sorry.