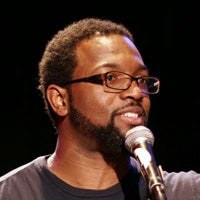 The defining moment of the interview, according to the Huffington Post, “came when Jarrett was hissed and heckled.”

Thurston, an occasional Huffington Post contributor himself, quickly fired back on his blog, calling the headline “wildly sensational,” adding: “I’d know. It was my interview.”

“The editors at Huffington Post must really have a mandate to drive traffic,” he wrote. “I’d hardly say hissing was the defining moment. [It’s] funny. New media is supposed to be about setting a different standard than the oft-criticized, sensational, conflict obsessed ‘mainstream media,’ but this headline proves that’s not always the case.”

Additionally, Thurston noted, the HuffPo post managed to misspell her name – in the headline. “Her name is Valerie. Not Valarie.”

To be fair, Thurston’s contention that he’d know because “it was my interview” doesn’t always hold water – how many times have we heard an interviewer or interviewee surprised after hearing about the reaction, despite being in the same room?

Where Thurston has HuffPo dead to rights is the traffic-driving mandate – or, perhaps more accurately, a comments-driving one. The Jarrett post has over 2,500 comments so far. And comments are a major selling point of HuffPo’s partnership with Facebook, which the companies announced yesterday. (Arianna herself boasted that the site generated more than 1.7 million comments in July alone.)

Huffington Post would have a better chance of defending the sensationalism charge … if it didn’t use related tags like “Hissed Netroots Nation” and “Jarrett Heckled Hissed” in the post.

This isn’t nearly as bad as what the Huffington Post did when Bonnie Fuller covered the death of Heath Ledger, tagging her stories with misspelled variations—and rumored causes of death—on purpose in order to boost their traffic with people who type “Keith Ledger” into search engines.

Sorry, that one still gets me.