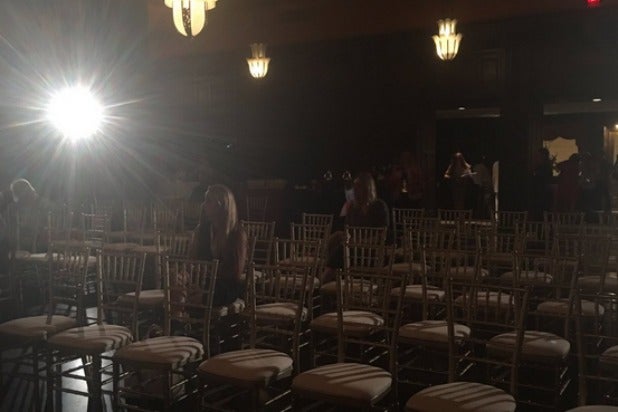 Only about 17 people showed up to a “Women Vote Trump” rally in Cleveland on Monday, according to a Guardian journalist present at the event.

The Guardian reporter tweeted that since the crowd was so small, panelists had to ask each other questions during the Q&A portion of the event.

Though Jezebel reported the number higher at 30, the figure still included journalists and media interns covering the event.

Stacey Dash, “Clueless” star and Fox news contributor, was scheduled to attend the event but was a no-show, according to Jezebel.

YouTubers Diamond and Silk were there, however, and they spoke about Democratic presidential candidate Hillary Clinton’s lack of job creation abilities.

“Unless you wanna talk about that one she created for Monica Lewinsky with her husband,” Diamond quipped, according to Jezebel.

By contrast, over 1,800 women volunteered to speak out at an anti-Trump rally and performance art piece on Sunday.

That event originally asked for 100 volunteers to protest in the nude while holding mirrors reflecting the sun in front of their bodies, which was symbolic of the reflection of their anger “against the hateful repressive rhetoric of many in the Republican Party towards women and minorities,” art photographer Spencer Tunick wrote on his website.

In the past, Trump has called women “fat pigs,” “slobs,” “bimbo,” “dog,” “a young and beautiful piece of ass,” and that “putting a wife to work is a very dangerous thing.” Just to name a few.

"I like a man you can judge by his actions," Ann Stone at Women Vote Trump event (attended by 17 people) #RNCinCLE pic.twitter.com/Ddpnuf4VP3

Q&A now happening, but crowd so small the panel are asking themselves most of the questions #RNCinCLE pic.twitter.com/1Wgm30LXR4

Turnout for Women For Trump event. The people in this picture are journalists and one media intern. #RNCinCLE pic.twitter.com/Xb1UNySw6J