Selena Gomez thinks Martin Short and Steve Martin are “weirdos” — but weirdos with whom she’s totally down to solve a crime — in the newly released trailer for Hulu’s “Only Murders in the Building.”

In the preview, which you can view via the video above, the A-list actors take on the parts of three strangers living in a Manhattan apartment building who only become engaged with each other when a death in their building is ruled a homicide. As true crime podcast obsessives, Mabel (Gomez), Charles (Martin) and Oliver (Short) bond over their love of murder-solving while actually trying to solve a murder.

But the generational gap between Mabel and Charles and Oliver is something they will need to overcome if they want to get to the bottom of all this, seeing as the guys think the killer could be Sting, former frontman of The Police — and Mabel believes that’s “the guy from U2.” 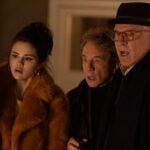 Per Hulu, “Only Murders In The Building” follows three strangers (Steve Martin, Martin Short and Selena Gomez) who share an obsession with true crime and suddenly find themselves wrapped up in one. When a grisly death occurs inside their exclusive Upper West Side apartment building, the trio suspects murder and employs their precise knowledge of true crime to investigate the truth. As they record a podcast of their own to document the case, the three unravel the complex secrets of the building which stretch back years. Perhaps even more explosive are the lies they tell one another. Soon, the endangered trio comes to realize a killer might be living amongst them as they race to decipher the mounting clues before it’s too late.

“Only Murders in the Building” was co-created and written by Martin and John Hoffman (“Grace & Frankie,” “Looking”). Martin and Hoffman executive produce along with Short, Gomez, Jamie Babbit, “This Is Us” creator Dan Fogelman and Jess Rosenthal.

The series premieres Aug. 31 on Hulu, with new episodes rolling out weekly after the initial launch.