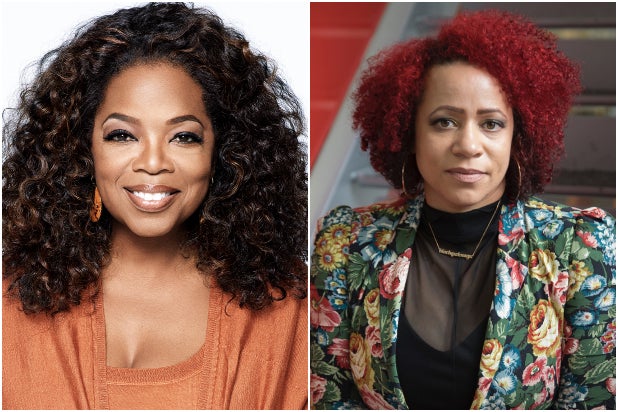 Oprah Winfrey and Lionsgate are teaming with the New York Times and Pulitzer Prize winner Nikole Hannah-Jones to develop their issue of The New York Times Magazine “The 1619 Project,” as well as the “1619” podcast, into a portfolio of films, TV series and other content, the companies announced Wednesday.

Hannah-Jones won the Pulitzer this year and is a staff writer at The New York Times Magazine. She’ll serve as the creative leader and producer on developing any feature films, TV series, documentaries, unscripted programming and other forms of entertainment to help her adapt “The 1619 Project” that chronicles the legacy of slavery in America and how that history still permeates our society today.

“The 1619 Project” was a landmark undertaking for the Times that connected the centrality of slavery in history with an unflinching account of the brutal racism that endures in so many aspects of American life today. It was launched in August 2019 on the 400th anniversary of the arrival of the first enslaved Africans in the English colonies that would become the United States, and it examines the legacy of slavery in America and how it shaped all aspects of society, from music and law to education and the arts, including the principles of our democracy itself.

Hannah-Jones created and was the architect of the initiative at The Times Magazine with contributions from Black authors, essayists, poets, playwrights, and scholars comprising a special issue of the magazine and a special section in the print edition of The New York Times produced in collaboration with the Smithsonian’s National Museum of African-American History & Culture, as well as a five-part podcast that topped the Apple Podcast charts.

“The 1619 Project” was one of The Times’ most widely read pieces of last year and was even discussed on the U.S. Senate floor. It’s also being adapted into a series of books with One World, a division of Penguin Random House, and is already changing the way that American history is being taught in schools.

“We took very seriously our duty to find TV and film partners that would respect and honor the work and mission of ‘The 1619 Project,’ that understood our vision and deep moral obligation to doing justice to these stories. Through every step of the process, Lionsgate and its leadership have shown themselves to be that partner and it is a dream to be able to produce this work with Ms. Oprah Winfrey, a trailblazer and beacon to so many Black journalists,” Hannah-Jones said in a statement. “I am excited for this opportunity to extend the breadth and reach of ‘The 1619 Project’ and to introduce these stories of Black resistance and resilience to even more American households.”

“From the first moment I read ‘The 1619 Project’ and immersed myself in Nikole Hannah-Jones’s transformative work, I was moved, deepened and strengthened by her empowering historical analysis,” Winfrey said in a statement. “I am honored to be a part of Nikole’s vision to bring this project to a global audience.”

“For many Americans, ‘The 1619 Project’ was a great awakening and a true history that you probably never learned in school,” Lionsgate CEO Jon Feltheimer said in a statement. “For others, the project was a fresh analysis of the historical record by one of the world’s leading media authorities. We’re proud to partner with The New York Times, Nikole Hannah-Jones and Oprah Winfrey, a creative talent with unparalleled stature, to amplify Nikole’s voice and reach across our worldwide platform to marshal all of our top creative relationships to translate her vision into a canon of storytelling for a global audience.”

“Since the publication of ‘The 1619 Project’ last year, we have been searching for the right partners to expand the reach of its message into film and television while preserving the authenticity of its voice,” New York Times assistant managing editor Sam Dolnick said in a statement. “We believe that Lionsgate and Oprah Winfrey are the perfect combination of partners who understand the editorial integrity of The Times and the gravity of ‘The 1619 Project’s’ message, and have the reach, resources, compassion, and talent relationships to join with us and with Nikole in producing films, television, and other programming for a global audience that do justice to the project.”

“Nikole Hannah-Jones and her deeply reported journalism has done nothing short of challenging the entire history we thought we knew, revealing the true role of slavery and the impact of racial prejudice in shaping the America of today,” Lionsgate Motion Picture Group chairman Joe Drake and Lionsgate Television Group chairman Kevin Beggs said in a statement. “The truths she uncovers are painful and disturbing, but we are better for it because her crowning accomplishment in shining a spotlight on the previously untold contributions of Black Americans delivers a powerful message of empowerment and inclusion. That is the message that we want to advance through feature films and television series whose storytelling, breadth of scope, and world-class talent do justice to their subject matter.”

Explore some of “The 1619 Project” essays here and podcasts here.